Glycerin is an odourless, colourless, viscous liquid that is sweet in taste and non-toxic in nature. The glycerin backbone is found in the lipids known as glycerides. As glycerine is having antimicrobial and antiviral properties it is widely in use in wound and burn treatments. It is also in use as an effective marker to measure liver disease. Glycerin is widely in use in the food industry as a sweetener and as a humectant in pharmaceutical formulations. Glycerin owns the presence of three hydroxyl groups, glycerol or glycerin is easily miscible with water. 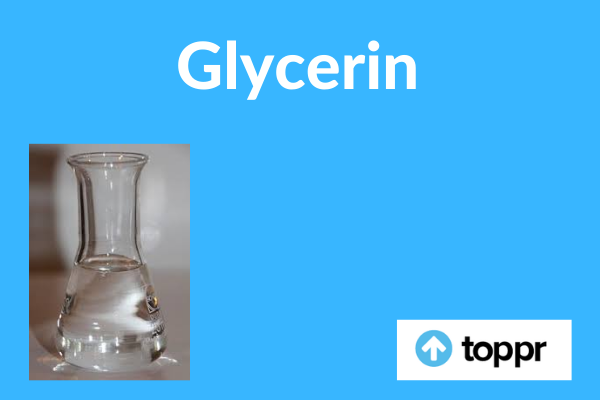 This solvent has a chemical formula \(C_3H_8O_3\). It is also known as Glycerol or glycerine. It is hygroscopic in nature. Glycerin is found in lipids like triglycerides. It is obtained from animal and plant sources. It is water-soluble due to three-three hydroxyl groups. Glycerin is produced through the processes like saponification, hydrolysis, transesterification of triglycerides. Synthetic glycerol can be produced by propylene.

In the late 1700s K. W. Scheele, the Swedish chemist accidentally discovered glycerin. One day he was heating a mixture of olive oil and litharge (lead monoxide) and in the course of the experiment. The glycerol thereby was manufactured by following the course. He described alcohol as the “sweet principle of fat.”

Scheele later discovered that other metals and glycerides produce the same chemical reaction which yields glycerin and soap by the method of saponification. In 1783, he published a description of his method of preparation and other stuff in the lab of Sweden. Scheele’s technique was practised to commercially manufacture glycerol for a few years.

We usually get glycerin from plant and animal sources where it is found in the form of triglycerides, esters of glycerin with long-chain carboxylic acids. The reaction, saponification, or transesterification of these triglycerides produces glycerin as well as the fatty acid derivative. Triglycerides are altered with the hydroxide to present alcohol and fatty metal salt or soap.

Glycerin is created by varied routes from propene. The epichlorohydrin method involves the chlorination of propylene to allyl chloride. This later oxidizes with hypochlorite to produce dichlorohydrins. This in turn reacts with a strong base to give epichlorohydrin. This epichlorohydrin is then hydrolyzed to make glycerin.

Glycerin is of lower pressure than is expected from its mass, due to the molecular association characteristic of alcohols. Many of the important uses of glycerol are mostly due to their relative volatility. In glycerin solution, there are a variety of determinations of its pressure and its partial pressure. The pressure of 100% alcohol is below 0.001mm at room temperature, and below 0.2 mm. at \(100^o C\).

Hygroscopicity: An anhydrous alcohol contains a very high affinity for water. It is a property that is chargeable for its use is as a desiccant for gases. One of the important key value of it is the capacity to absorb moisture and retaining it for a long. It is the idea for its use as a substance and as an acquisition agent.

Temperature: The freezing point of glycerin is almost precisely at 18.170 degree Celsius. Glycerol is seldom visible in its crystallized state. Glycerin has a tendency to supercool easily, and its pronounced effect of small amounts of water in it.

Thermal Conductivity: The thermal conduction of solutions of alcohol will increase as their water content will increases. It will increase with rising temperature, the speed of modification being linear.

Viscosity: When glycerol is supercooled, its viscosity gradually increases. As viscosity increases then a more rapid change from viscous liquid to a rigid glassy state occurs at a temperature range of -70 to 1 degree Celsius. Within the vitreous state, its physical constants lie nearer to those of crystalline glycerin than liquid glycerin.

The primary use of glycerin is in the food and beverage industry. Glycerin is useful as a humectant, sweetener, and solvent. It is also in use as a preservative for the storage of food items. Some important uses of glycerin are as follows:

Question 1: What glycerin does to the skin?

Answer: On applying glycerine to the skin, it retains moisture in the skin and gives it a safe, youthful glow. It helps to reduce wrinkles by attracting moisture to the top layer of skin and leaves the skin looking soft and smooth. Additionally, glycerine increases skin function to delay ageing.

Question 2: Is glycerin safe to eat?

Answer: Typically, glycerin is in use as a sweetener and preservative in food items. This compound is quite safe for consumption. Glycerin can be classified as a caloric macronutrient. Thou, it is very important to note that some individuals may be allergic to glycerin. This compound may be toxic to such people.

Question 3: How can glycerol be produced?

Answer: Generally, glycerine is obtained from animal and plant sources. It naturally occurs in the form of triglycerides, which are esters of glycerol featuring carboxylic acids with long chains. The preparation of glycerin also involves the use of propylene as feedstock. One of the most important uses of glycerin is in the food and beverage industry, where it serves as a humectant.