Ever wondered why lemon tastes so sour? Or why milk gets spoiled if you mix it with lime juice. It is because of the acids present in it. Acids and Bases are one of the important topics of chemistry, Let’s find out more about them. 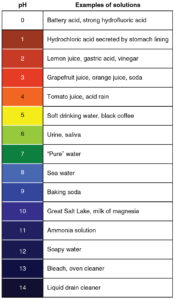 Acids are a molecule or other species which can donate a proton or accept an electron pair in reactions. The word “acid” is derived from the Latin word “acidus” which means sour. All acid elements have a few things in common i.e all are sour in taste, they turn blue litmus paper to red, and lose their acidity if they’re combined with alkaline substances. The pH level of acids ranges from 0 – 6.

Some common examples of acids are Citrus fruits such as lemons, limes, oranges, grapefruit, etc. All these fruits contain citric acid. Hence, they taste sour or tart. Citric acid is a weak acid but still, it produces hydrogen ions when mixed with water and that’s why the pH of lemon juice is 2. Another example of an acid is vinegar. Vinegar consists of acetic acid. Ever wondered why your skin becomes red and swollen after an ant bite or a mosquito bite? Because these insects inject formic acid which causes such skin reactions. Nitric acid, sulfuric acid, hydrochloric acid, etc. are other common ones.

The properties of Acids are as follows;

Learn more about the Properties of Bases here.

Acids are often classified on the basis of source, the presence of oxygen, strength, concentration and basicity.

Classification based on the source

This means that the acid is classified on the basis of their source or origin. They are mainly of two types: Organic acid and Mineral acid.

Classification based on the presence of Oxygen

This means that the acids are classified on the basis of the presence of oxygen. These are of two types: Oxy-acid and Hydracids.

Classification based on the Strength of the acid

Classification based on its concentration

As we have studied above, the concentration of the acid depends on the number of hydrogen ions that it produces in water. Based on this the acid is classified as :

Classification based on the basicity of the acid

Acid on dissociation in water produces hydrogen ion. The number of these hydrogen ions that can be replaced in an acid is the basicity of an acid.

Learn more about the concept of Neutralization here.

Sol: The correct answer is option ‘c’. The acid in aqueous solution gives H+ ion which combines with water to form hydronium ions (H3O+). Hence, acid is characterised by the presence of hydronium ions.