In view of the coronavirus pandemic, we are making LIVE CLASSES and VIDEO CLASSES completely FREE to prevent interruption in studies
Chemistry > Chemical Reactions and Equations > How to Balance Chemical Equations? | 5 Simple and Easy Steps

Symbolic representation of a chemical reaction is referred to as a chemical equation. Basically, the symbols are the letter that represents an element. Moreover, in a chemical reaction, the reactants are written on the left side and products are written on the right side. In addition, we connect these two sides with an arrow leading from the left to the right, symbolizing the reaction. Besides, in this article, we will learn how to balance chemical equations?

As per the law of conservation of mass, “atom can neither be created nor can be destroyed”. So, the product and reactants of chemical equations should have an equal number of atoms on both sides. 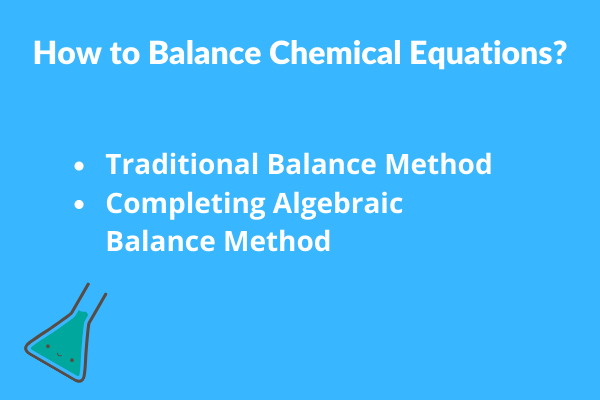 In this reaction, propane burns in the presence of oxygen to produce water and carbon dioxide.

Look at the subscripts numbers written next to each element to find the number of atoms in the equation. Make sure to do this for both sides. Also, it would be better to connect it back to the original equation, noting how each element appears.

Now you a see that on both sides there are 3 carbon atoms which make carbon atom in balance. However, in a chemical equation, you can alter the coefficient but you can’t change the subscripts.

Now, on both the side there is equal number of carbon, hydrogen, and oxygen atoms. Hence, the equation is complete.

Algebraic balance method or Bottomley’s method, is very useful for complex reactions however, it takes a bit longer.

Firstly, write down the equation as it is

Now allot a letter to each compound or element

See if the elements exist on both sides and set those equal to each other.

Now solve all these numeric equations to get values of each coefficient. As there are more variables than equations so there can be multiple solutions. Al you need to do is find the smallest and non-fractional form. For doing it quickly assign a value for the variable. Let’s take a=1. Then,

So this displays that the values are as:

So the complete equation is: