In general, a pesticide is a chemical compound (such as carbamate) or a biological agent (such as a virus, bacteria, or fungus) that incapacitate, kill, or otherwise prevent pests. Target pests can include insects, plant parasites, weeds, molluscs, birds, mammals, fish, nematodes (roundworms) and microbes that damage property, cause or transmit disease, or are vectors of disease. In addition to these benefits, pesticides often have disadvantages, such as potentially toxic to humans and other species. 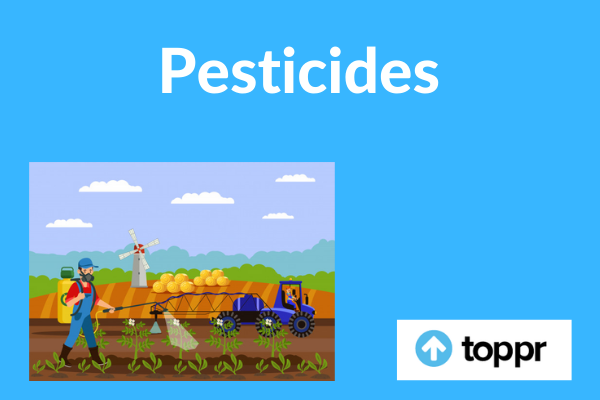 What is a Pesticide?

Pesticides are chemical compounds useful in killing pests. Generally, a pesticide is a chemical compound or even a biological agent such as a bacteria, virus, antimicrobial, or disinfectant that prevents, incapacitates, or kills pests. The term pesticide includes all of the following: herbicide, insecticide (which can involve insect growth regulators, termiticides, etc.) nematicide, molluscicide, pesticide, avicide, rodenticide, bactericide, insect repellent, animal repellent, antimicrobial and fungicide.

The most popular of these are herbicides, which account for nearly 80% of all pesticide use. Many pesticides serve as plant protection products (also known as crop protection products) that usually protects plants from weeds, fungi or insects. As an example-The fungus, Alternaria is used to battle Aquatic Weed, Salvinia.

Even before 2000 BC, humans have used pesticides to protect their crops. The first known pesticide was the elemental sulphur dust used by ancient Sumerians around 4,500 years ago in ancient Mesopotamia. Rigveda, about 4,000 years old, refers to the use of poisonous plants to control pests. By the time of the 15th century, toxic chemicals such as arsenic, mercury and lead were useful in destroying the pests in crops. Nicotine sulphate was derived from tobacco leaves in the 17th century for use as an insecticide. The 19th century saw the introduction of two more natural pesticides, pyrethrum, derived from chrysanthemums, and rotenone, derived from the roots of tropical vegetables. Until the 1950s, pesticides based on arsenic were dominant.

Paul Müller found that DDT was a highly effective insecticide. Until 1975 organochlorines such as DDT were dominant, but by the year of 1975 organophosphates and carbamate replaced DDT in the US. However, 20 years later, because of the biological consequences and human safety concerns, almost 86 counties declared the banning of DDT. Since then, pyrethrin compounds have become the dominant insecticide in the industry. Herbicides became popular in the early 1960s, then came “triazine and other similar nitrogen-based compounds, carboxylic acids including glyphosate and 2,4-dichlorophenoxyacetic acid”.

The Food and Agriculture Organization (FAO) has defined pesticide as:

“any substance or mixture of substances intended for preventing, destroying or controlling any pest, including vectors of human or animal disease, unwanted species of plants or animals, causing harm during or otherwise interfering with the production, processing, storage, transport, or marketing of food, agricultural commodities, wood and wood products or animal feedstuffs, or substances that may be administered to animals for the control of insects, arachnids, or other pests in or on their bodies”.

Grouped by the pest types they Kill;

Depending on how biodegradable they are

Biodegradable pesticides are those that can be broken down into harmless compounds by microbes and other living organisms within less period of time.

Few pesticides are known as non-biodegradable, also called persistent pesticides. The most long-lived pesticide materials include aldrin, parathion, DDT, chlordane, and endrin, they take a long period of time to break down. These pesticides can survive in the soil for over 15 years or more.

Another way of thinking about pesticides is considering the chemical pesticides extracted from a common source or some production method.

Many organophosphates are insecticides that impact on the nervous system by compromising the enzyme that regulates the neurotransmitter.

Carbamate pesticides affect the nervous system by compromising the enzyme that regulates the neurotransmitter similar to the organophosphates, but carbamate enzyme effects are usually reversible.

This type was common in the early years when pesticides came into the market. Many countries have banned organochlorine insecticides from their markets because of their impacts and persistence on health and the environmental factors (e.g., DDT, chlordane and toxaphene).

There are synthetic variants of pyrethrin, a naturally occurring pesticide present in chrysanthemums (Flower). Their development is such a way they can maximize their environmental resilience.

The biopesticides are a type of pesticides obtained from natural resources such as animals, plants, bacteria, and certain minerals.

Answer. Pesticides are potentially harmful to all living organisms, including humans, and one must use it carefully and dispose of properly. They are among the leading causes of self-poisoning deaths, mostly in low-and middle-income countries.

Many older and cheaper pesticides like dichlorodiphenyltrichloroethane (DDT) and lindane, can persist in soil and water for very long. These have negative impacts on large parts of the environment and can accumulate in the food chain. They are considered carcinogenic and were toxic to humans and other living organisms, so they were banned in 2001.

Q.2. What are a few examples of pesticides?

Q.4. What are the disadvantages of pesticides?

Answer. The disadvantages of the extensive use of pesticides are significant. It includes domestic animal contamination and death, loss of natural antagonists to pests, pesticide resistance, honeybee declination which affects pollination, death of fishes and birds, and groundwater contamination.

In addition, certain pesticides cause immunotoxicity in humans, which can contribute to carcinogenesis,  immunosuppression, hypersensitivity (allergies), autoimmune diseases, and inflammation; children may be more vulnerable to the toxic adverse effects of pesticide exposure.

Q.5. What are the benefits of pesticides?

Answer. The main advantage of pesticides is that they can help farmers preventing insects and other pests from destroying crops. However, below are some other key advantages:

Share with friends
Previous
How To Make Slime
Next
Phenyl