Water is a very important resource. We use water for so many activities such as drinking, washing, cooking, cleaning, and many more. This precious resource is enormously getting wasted due to human carelessness and lack of planning. That’s the reason why many people are facing the scarcity of water. According to the United Nations, a person needs a minimum of 50 litres of water per day. This water is for his basic needs of hygiene, cooking and drinking. But there is a large population that fails to receive this small quantity of water. Hence most of the population is getting affected by the scarcity of water. 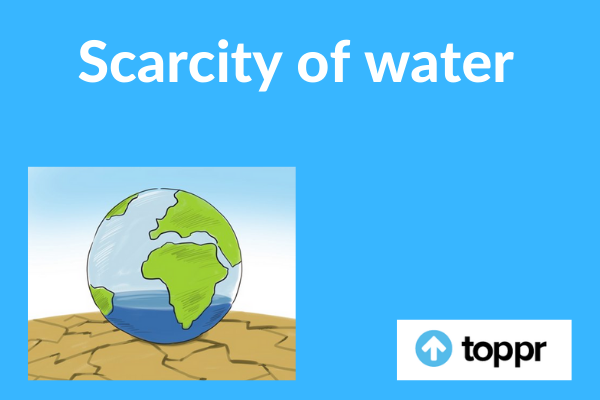 What is the Scarcity of Water?

Water scarcity also called water stress or water crisis. Scarcity of water is the condition when there is a lack of freshwater resources to meet the standard water demand. Humans are facing a water crisis, due to unequal distribution as if exacerbated by climate change resulting in some very wet and some very dry geographic locations. Also, a sharp rise in global freshwater demand in recent decades is by industries. Water scarcity can also be caused due to droughts, lack of rainfall, or pollution.

Global water scarcity is the temporal and geographic differences between the demand for freshwater and the availability of water. An increase in world population, improving living standards of people, changing consumption patterns are a few of the reasons for the rising global demand for water. Climatic changes, such as altered weather-patterns, cutting of trees on large scale, increase in pollution, greenhouse gases, and wasteful use of water causes the insufficient supply of water.

At the global level and on an annual basis, enough freshwater is available to meet such demand, but geographic and temporal variations of water demand and availability are large, leading to water scarcity. Scarcity varies over time as a result of natural hydrological variability. Water scarcity varies even more so as a function of prevailing economic policy, planning and management approach.

The International Resource Panel states that governments have tended to invest in largely inefficient solutions to overcome the scarcity of water. These solutions are mega-projects like dams, canals, aqueducts, pipelines and water reservoirs. These are generally neither environmentally sustainable nor economically viable. The government should make holistic water management plans to look after the whole water cycle. This cycle is from source to distribution, economic use, treatment, recycling, reuse and return to the environment.

Causes of Scarcity of Water

General Bifurcation according to Water Scarcity

There are two types of water scarcity i.e., physical and economic. Physical, or absolute, water scarcity is the result of a region’s demand because of the limited water resources found there. Around 1.2 billion people live in areas serving under physical scarcity. Many of them live in arid or semi-arid regions.

Mismanagement of water or underdevelopment of water means that the accessible water is polluted for human consumption. Economic water scarcity is also a result of the unregulated use of water in the field of agriculture and also in industries.

Approaches to overcome the Scarcity of Water

1)  A water tax on heavy users could deter wasteful water consumption in industry and agriculture while keeping household water prices. Thou consumers would experience higher product prices due to the increased costs of production. Ideally, such a tax would help decouple economic growth from water use. Rebates for the replacement of water-wasteful appliances like toilets and showerheads are a cost-effective alternative.

2) Industrial agriculture is an important contributor to water pollution. Many policies that incentivize organic farming and other sustainable farming practices serve to secure water sources from agricultural pollutants.

3) Rainwater harvesting, recycled wastewater allows to overcome scarcity and ease pressures on groundwater and other natural water bodies. Groundwater recharge is a well-known process to prevent water scarcity that allows water to move from surface water to groundwater.

5) In villages implementation of direct borewell should be done. By this people can recharge wherever possible to improve the availability of water for drinking and irrigation needs. Repairing existing but unused water structures is also important.

FAQs on the Scarcity of Water

Question 1: How does water scarcity affect the environment?

Answer: The resultant overuse of water-related to water deficiencies is mostly situated in irrigation agriculture. It is detrimental to the environment in a variety of respects, including expanded saltiness, nitrogen debasement, and the depletion of floodplains and wetlands.

Question 2: What are the impacts of water scarcity?

Answer: In the four fields such as wellness, hunger, education, and insecurity, the consequences of water shortages can be encapsulated together. Less water also suggests that sewage does not flow, and therefore mosquitoes breed on stagnant polluted water like most insects. Deadly malaria and other diseases are the results of water scarcity. Insufficient intake of water harms the human body and causes kidney problems, constipation, and various mental changes. In our body, blood pressure and heat flow are maintained by the consumption of water. The usable water present on earth is needed to be saved in order to live a healthy and sustainable living.

Question 3: How is water wasted?

Answer: When brushing teeth, shaving or washing the dishes and other utensils, one of the most common ways people wastewater is by keeping the water flowing through taps. As soon as you start cleaning, shaving or doing the dishes, the tap should be turned off. Fill one sink with clean rinsing water and one with soapy water for cleaning the dishes will surely save water.