Slime is a product made in 1976. It contains non-toxic whiskers or any colour material made from guar gum. Slimes of different types are useful in chemistry. For example, slimes containing rubber insects, eyeball etc. In the late 1970s, a slime monster board game introduced. In this article, we will discuss how to make slime. 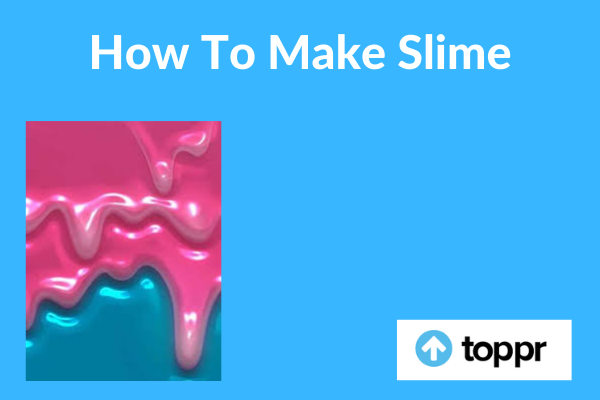 How To Make Slime

Slime is a nasty made of Borax and glue of any colour. It is a soft moist clay, vicious and a thick substance which covers a surface of the easily some animal surface example snail and snake. It is a mucous substance produced by various organisms but now it is used as a toy and can be made easily at home. Slime is a special kind of liquid called a non-newtonian fluid. This is why when you drop on a hard surface it bounces, or if you pull it fast it snaps. But it is still fluid. It adopts the shape of its container, and if you leave it on a slope it will slowly flow and ooze downhill.

How to make Slime?

Slime can be made at home easily from various material for example moisturiser, blue, Borax, etc. Here we will discuss a recipe of slime with 8 substances.

Let’s start with taking a closer look at blue. White school glue is PVA glue. That stands for Polyvinyl acetate. Like it has a long chain of carbon and every carbon there’s oxygen, another carbon, and another oxygen. Add this glue to a solution of Borax, it changes almost instantly.

Now you can’t pick it up it no longer takes to your fingers. It’s a stretchy stiff substance. It was Borax due to which the sticky gum becomes these slime. Borax is a salt called sodium Tetraborate and when it’s added to glue it bonds to the oxygen in the PVA, linking the long trends together. When they are linked together they behave very differently. They don’t blow past each other as well as they did before.

If we saturate plain glue with Borax, we get a very stiff substance. It’s so deaf, it’s hard to mould and stretch. This is why, in our classic slime recipe, you add water to dilute the glue before you add the forex.

In the classic slime recipe, we’ll mix one-part glue with one part water and food colouring mix it properly. If we did not mix it properly then some area remains more concentrated with glue and other more watery which is not good for our slime.

Now we will make a Borax solution. For this, we add one tablespoon of Borax powder to One Cup of water now dumb your glue mixture into the borax solution and then left it out. After you lifted out, spend a minute or 2 kneading it together. You can also add one tablespoon of the boric solution to the blue and mix. Then add the second a spoonful of the boric solution and mix solution after the second spoonful, you might be thinking that it’s not working and won’t come together, and you will need to add more Borax. But keep in mind not to add more Borax because your slime may end up being too stiff.

Take a minute or 2 to mix it, and then test it with your fingers and see how tacky it is. Then, if you need to sprinkle a little more solution over the slime. The texture of finished clime is going to be pretty similar regardless of whether you use version one or version 2.

FAQs about How To Make Slime

Q.1. What do you understand by polysaccharides?

Answer. Polysaccharides are long chains of sugars molecule or monosaccharides as building blocks. They may be homopolymers or heteropolymers.

Answer. Glycogen is a type of Polysaccharide formed by the condensation of many glucose molecules. It is suitable for storage materials. They are large and insoluble in water So they do not change osmotic pressure in the cells. Due to their large size they, are unable to diffuse through the cell membrane and can easily be hydrolysed when needed.