Centrifugation is a process which separates or concentrates materials suspended in a liquid medium. The theoretical basis of this technique is the effect of gravity on particles in suspension. 2 particles of different masses will settle in a tube at different rates in response to gravity. The centrifugal force is proportional to the rotation rate of the rotor. The centrifuge consists of a rotor and closed in a refrigerated chamber buy an electric motor. 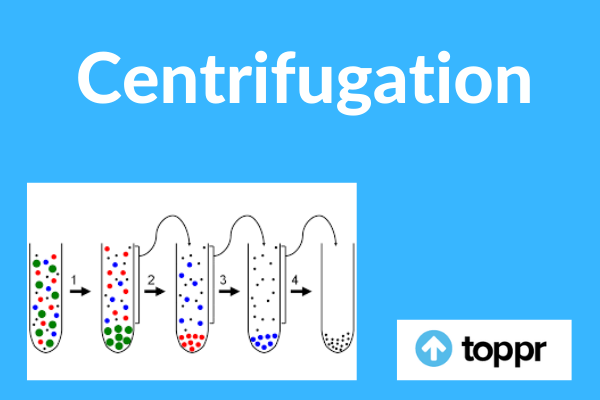 It is a unit operation working for separation separating the consequent present in a dispersion with the help of centrifugal force for example centrifugal force includes the earth revolves around the sun. It is a technique which involves the application of centrifugal force to separate particles from a solution according to their size, shape, density, the viscosity of the medium and rotor speed.

1) The centrifuge involve the s principle of sedimentation.

2) The principle of the centrifugation technique is to separate the particles suspended in liquid media under the influence of a centrifugal field. These are placed either in tubes or bottles in a rotor in the centrifuge.

1) To separate the immiscible liquids

2) To purify the component by removing impurities in the supernatant liquid.

3) To separate crystalline drugs from the mother liquor.

4) To test the emulsion and suspensions for creaming and sedimentation at an accelerated speed.

3) Evaluation of suspensions and emulsion.

4) Determination of molecular weight of collides.

7) The clarification and stabilization of the wine.

9) Use in water treatment.

10) Removing water from lettuce after washing it in a salad spinner.

2) The solid or liquid of higher specific gravity is thrown out word with greater force.

It allows separation of many or all components in a mixture and allows for measurement also. There are 2 forms of density gradient centrifugation one is rate zonal centrifugation and the second is I saw pyknic or sedimentation equilibrium centrifugation.

B) Isopycnic or sedimentation equilibrium centrifugation – In this type of centrifugation, the solution contains a greater range of densities. The density gradient contains the whole range of densities of the particle in the sample pool stop each particle with sediment only to the position in the centrifuge tube at which the gradient density is equal to the phone density. In sedimentation centrifugation separation of particles occur into the zone based on their density difference, independent of time.

Differential centrifugation is a common procedure in microbiology and cytology useful to separate certain organelles for further analysis of specific parts of cells. In the process, a tissue temple is first homogenised generalized to break the cell membranes and mix up the cell contents. The homogenate is then subjected to repeated centrifugation, each time remove in the palate and increasing the centrifugal force.

Svedberg coined the term “ ultracentrifugation”.He was a chemist. He used the ultra fuse to determine the MW and subunit structure of emo globin. The first commercial ultra fuse was produced in 1940. An important tool in biochemical research is the centrifuge, which through rapid spinning imposes hi centrifugal forces on suspended particles, or even molecules in solution, and causes separation of such matter on the basis ultracentrifugation of differences in weight. For example, red cells may be separated from the plasma of blood, nuclei from mitochondria and cell homogenate, and one protein from another in complex mixtures.

Q.1. What is sedimentation?

Answer – Sedimentation is the tendency for particles in suspension to settle out of the fluid in which enter and come to rest against a barrier.  This is due to their motion through the fluids in response to the forces acting on them.

Q.2. How is the principle of centrifugation helpful in blood banks?

Answer- We know that blood is a colloidal solution ( neither dissolve not settle down ). In blood banks, a centrifuge machine is useful. In the centrifuge machine, a test tube with blood sample us rotated with a very high speed. Due to centripetal acceleration the heavier component settle down and the components of blood separate.

Q.3. What is a centrifugal pump?

Answer- Centrifugal pump is a hydraulic machine which converts mechanical energy to hydraulic energy by centrifugal force. It works on the principle that when pressure head increases its tangential velocity also increase.