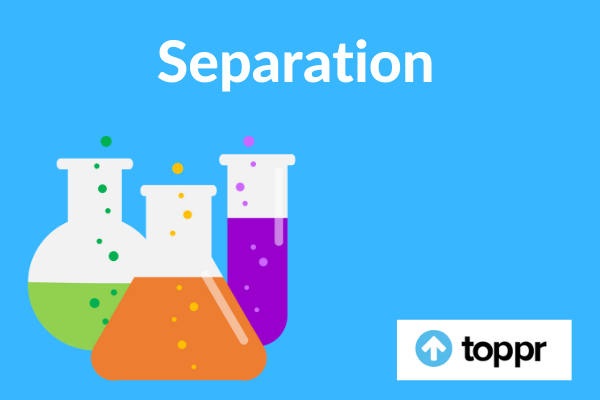 A separation is a method that converts a mixture or solution of chemical substances into two or more distinct product mixtures. At least one of the results of the separation is a supplement in one or more of the source mixture’s constituents. In some cases, a separation process may fully divide the mixture into its pure constituents. Separations exploit differences in chemical properties or their physical properties. For instance, size, shape, mass, density, or chemical affinity between the constituents of a mixture.

Regardless of a few exceptions, elements or compounds exist in nature in an impure state. Thou these raw materials go through a separation process before they can be put to productive use. Using separation techniques are important for the modern industrial economy.

The purpose of separation can be analytical. It can be in use as a lie component in the original mixture without any trial to save the fractions, or maybe preparative. Preparative means to prepare, it can be fractions or samples of the components that can be saved. The separation can be done on a small scale or large scale. On small scale, it is effectively a laboratory scale for analytical or preparative purposes. On a large scale, it is effectively an industrial scale for preparative purposes, or on some intermediate scale.

Separations require total purification. For instance, as in the electrolysis refining of bauxite ore for aluminium metal. Though a good example of an incomplete separation technique is oil refining. Crude oil occurs in nature as a mixture of various hydrocarbons and impurities. The refining process of crude oil splits its mixture into other.

More valuable mixtures like natural gas, gasoline and chemical feedstocks, none of them are pure substances, but each of them must be separated from the raw crude. In both of these cases, a series of separations is important to get the desired or required end products. In the case of oil refining, crude is passed to a long series of individual distillation steps, each of which produces a different or intermediate product.

The methods of separating mixtures are as follows:

Threshing is mostly done during the harvesting of crops. Usually, the stalks of the wheat are dried and it is harvested. The grain is then separated from the stalks. It is then grounded into the floor by beating the dry stalks of grains to shake off the dried one.

In this method, when the grains are collected from the process of threshing, it needs to be cleared properly from husks and chaffs before it is turned into flour. Usually, the separation of the mixture is done with the help of wind or blowing air. The husk and chaff are blown away by the wind when the farmers keep the mixture from a certain height to the ground. Later, the heavier grains are collected in one place.

Sieving is done to separate mixtures that include substances mostly of different sizes. The mixture is allowed to pass through the pores of the sieve. All the smaller substances pass through it while the bigger once is retained.

It is a technique that is in use for separating a mixture. The mixture is usually a solution of a solvent and a soluble solid. The solution is heated up to the point until the organic solvent evaporates and it turns into a gas or leaves behind the solid residue.

When mixtures consist of two or more pure liquids than distillation is preferred. The components of a liquid mixture are vaporized, condensed and then it is isolated. The mixture is heated and the component that is volatile in nature vaporizes first. The vapour moves are allowed to pass through a condenser and then it is collected in a liquid state.

Filtration is the most common method of separating a liquid from an insoluble solid. For example, the mixture of sand and water. This method is in use to remove solid particles from the liquid. Different kinds of filtering agents are normally in use like filtering paper or other materials.

Sedimentation is a process in which heavier impurities in liquid normally water settle down at the bottom of the container.

A separating funnel is in use to segregate two immiscible liquids. The method involves taking advantage of the unequal density of the particles in the mixture. Oil and water can be separated with the help of this technique.

This method is useful when one substance in the mixture has some magnetic properties then. Strong magnets are in use to separate magnetic elements in this method.

This technique separates dissolved substances by different interaction with the material. Commonly used chromatography is:

Electrophoresis is in use to separates organic molecules based on their different interaction with a gel under an electric potential. Some of them are Capillary electrophoresis, Electrostatic separation, Elutriation etc.

Some of the flotation techniques are:

1)  Dissolved air flotation, removes suspended solids non-selectively from slurry by bubbles that are generated by air coming out of solution.

Question 1: What are the chemical methods of separation?

Question 2: What are the two types of mixtures?

Answer: The two types of mixtures that exist are heterogeneous and homogeneous. Two or more ingredients according to their phases, regions with their structure and properties intermingle in heterogeneous mixtures but remain physically distinct.

Question 3: How can homogeneous mixtures be separated?

Share with friends
Previous
Scarcity of Water
Next
Reverse Osmosis