Distillation is the process in which water vapours converts into volatile liquids and separate through selective boiling. It is carried out between liquids having different boiling points. This technique is useful in obtaining a pure liquid from non-volatile impurities or to raise the absorption of the specific component in a mixture. It’s a reversible process, i.e., a physical process which means the process can be returned to the original state of matter. But dry distillation is a chemical process that includes the destructive distillation of solid products to convert them into gaseous products.

If we distillate again the pure liquid to increase the purity of liquid then the process is Double Distillation. This process can also be performed in plants and the plant which carries out this process is called distillery. We use still(apparatus) to perform plant distillation. 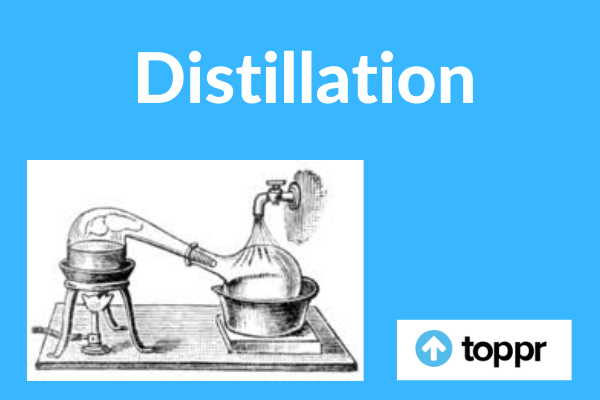 Some of the key distillations are:

It involves the immediate change of liquid state to vapours state and condensing of vapours by cooling. This method is only applicable for liquids having a minimum boiling point of difference of 25 degrees Celsius. Example – chloroform, benzene, toluene, acetone, etc

The liquids whose boiling point difference is more than 25 degree Celsius or the liquids which have similar boiling points performs this process. It involves regularly vaporization – condensation steps. It takes place in fractioning column. Each successive condensation & vaporization is termed as the theoretical plate. It is administered using a fractionating column which consists of an extended glass tube, small stones, porcelain rings. The fractionating column is employed to extend the cooling area.

It is a process involving thermally responsive compounds (compounds that are sensitive to heat). It requires low heating at temperatures because the temperature of the steam can be controlled as compared to surface temperature. Example – bromobenzene, aniline.

High boiling mixtures are eligible for this process. In this process instead of increasing the temperature, the pressure of the liquid is decreased to bring it to vapour pressure, and then the boiling, as well as the distillation process, is carried out. It is in use to obtain high purity samples of compounds. The equipment useful in this process is the rotary evaporator. Example – the distillation of glycerol.

It is a process that takes place in a long container with the help of using a zone heater. It involves limited melting in liquid mixture and condensation of vapour.

Some compounds can react with air when exposed. So to distillate those compounds, this process is useful. It is the same as vacuum distillation but we substitute the vacuum with an inert gas after the completion of distillation This method uses the Perkin Triangle apparatus.

The distillation involves the liquid mixture to travel short distances of just a few centimetres. This method is useful to purify a small number of compounds and less amount of compound is lost while performing. The kugel Rohr apparatus is in use to perform this method.

Some of the uses are:

Q.1 Why is distillation an ideal way to separate two liquids?

Answer. In this process, liquids boil until they reach their boiling points. It then evaporates (vaporizes) and passes through the condenser where heat is far away from the vapor and it turns back into a cool, clean reusable liquid (the same process that causes dew to form).

Answer. 1. Fractionation will use additional equipment called the ‘fractionating column’, while the simple distillation doesn’t need that equipment.

2. Simple distillation is usually in use to separate the liquid substance from the solid substance. Doing such separation with fractionation isn’t sensible.

Q.3 In vacuum distillation, how vacuum is created?

Answer. The vacuum is generated using our JetVac technology. A chrome steel reservoir is prime once with a clean solvent. A little chrome steel pump is immersing within the liquid and is attached to an explosion-proof electric motor. When the motor is started, a clean solvent is drawn into the pump and made through a metal tube referred to as an aspirator. The aspirator seems like an open piece of pipe with a little orifice (hole) on one side. Because the high-velocity fluid is pump across the face of the orifice, it creates suction.