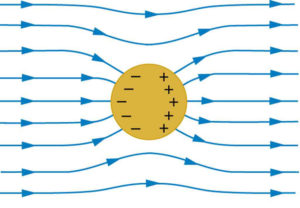 In an external electric field, they drift against the direction of the field. The positive ions made up of the nuclei and the bound electrons remain held in their fixed positions. In electrolytic conductors, the charge carriers are both positive and negative ions. Some of the important points about the electrostatic properties of a conductor are as follows:

I. The electrostatic field is zero inside a conductor

In the static condition, whether a conductor is neutral or charged, the electric field inside the conductor is zero everywhere. This is one of the defining properties of a conductor.

II. Electrostatic field lines are normal to the surface at every point in a charged conductor

Thus, free charges moving on the surface would also have experienced some force leading to their motion. But, this does not happen. Since there are no tangential components, the forces have to be normal to the surface.

III. In the static conditions, the interior of the conductor contains no excess charge

We know that any neutral conductor contains an equal amount of positive and negative charges, at every point. This holds true even in an infinitesimally small element of volume or surface area. From the Gauss’s law, we can say that in the case of a charged conductor, the excess charges are present only on the surface.

Let us consider an arbitrary volume element of the conductor, which we denote as ‘v’ and for the closed surface bounding the volume element, the electrostatic field is zero. Thus, the total electric flux through S is zero. So, from the Gauss law, it follows that the net charge enclosed by the surface element is zero.

As we go on decreasing the size of the volume and the surface element, at a point we can say that when the element is vanishingly small, it denotes any point in the conductor. So the net charge at any point inside the conductor is always zero and the excess charges reside at the surface.

IV. Constant electrostatic potential throughout the volume of the conductor