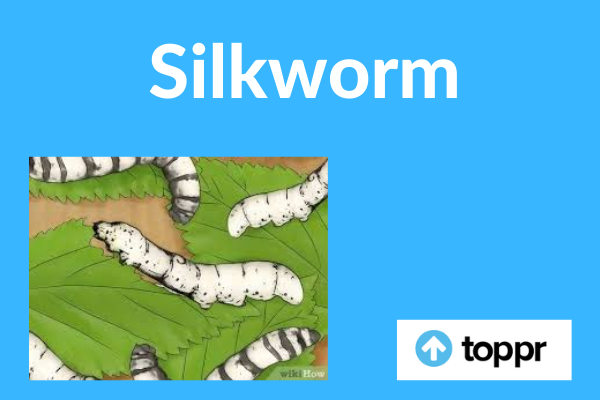 The larva of the Bombyx mori moth is the silkworm. Silk has been made for at least 5000 years or maybe more in China. The moth is important because it produces silk. It is completely dependent on humans, and it no longer lives in the wild. Silkworms eat mulberry leaves. Silkworms are native to northern China. The domesticated B. mori and the wild Bombyx Mandarina can still breed and produce hybrids.

The silkworm (female) lays about 300 eggs at a time. The silkworm that is a female silkworm lays eggs on the leaves of mulberry trees. The eggs are covered all around with gelatinous secretion by which they stick to the leaves. The female moth i.e., female silkworm lays eggs and dies after laying eggs. The reason behind this is as she does not eat anything during all this process so the silkworm dies. The eggs are placed in a cool place so that they can be stored for a long time. In a favourable condition, they hatch into larvae. Larvae are produced in about 2 weeks from eggs at a varying temperature between 18 degree Celsius to 25 degree Celsius.

History of Silk from Silkworm

In China, the discovery of the silkworm’s silk was first invented by the wife of the Yellow Emperor, Leizu. It was around the year 2696 BC. According to the book written in the 13th century, she was drinking tea under a tree and a cocoon fell into her cup of tea. She picked it out of the tea and as it started to wrap around her finger, she slowly felt something warm. When the milk ran out, she observed a small cocoon. In an instant, she got that this cocoon is the source of the silk. She taught this to the people and it became a common process.

Khotan is an oasis on the southern edge of the Taklamakan Desert. It one of the first places outside of inland China to start cultivating silk. In the far past, the Chinese protected their knowledge to produce silk. It is said that a Chinese princess smuggled eggs to Khotan and hidden them in her hair. After all, the way to cultivate silk was transmitted to Western Asia, Europe and many more places.

Japanese people also love silk. The people in japan started cultivating and weaving silk at an earlier age. According to the Records of the book Three Kingdoms, Japan exported silk to Wei, a kingdom in the northern part of the China mainland, in the 2nd century. It takes 5000 silkworms to produce a single kimono.

The life cycle of Silkworm

The first stage of the life cycle of the silkworm is an egg. The egg is laid by a female moth or female silkworm that is mostly the size of small dots. A female moth lays more than 300 to 350 eggs at a time. Usually, in the springtime, the eggs hatch due to the warmth. This procedure happens once every year.

In this stage, a hairy silkworm arises after the eggs crack. Basically, the growth of the silkworms happens in this stage.  Silkworms feed on mulberry leaves and consume a large amount of these leaves for around 30 days before proceeding to the next stage.

In this stage, silkworms spin a protective cocoon around themselves as a protective layer. It is the size of a small cotton ball and also made of a single thread of silk.

The pupa stage is a motionless stage. In this stage, the pupa is killed by plunging the cocoon into boiling water and unwind the silk thread.

In this stage, the pupa grows into an adult moth. The female moth lays eggs after mating and the life cycle of the silkworm begins again.

Processing of Silk from Silkworm

After spinning the cocoon, if the animal is allowed to survive, a hole in the cocoon is made when it exits as a moth. This would cut the threads and ruin the silk produced. Instead, silkworm cocoons are thrown into boiling water, which kills the silkworms and also makes the cocoons easier to get the threads.

It should be noted that an adult silkworm (moths) cannot fly. The silkworm moths have wings and it is about 2 inches wide and has a white hairy body. Females and males are similarly coloured. Adult silkworms have small mouths.

Basically, Silk is separated from the cocoon of the moth by exposing it to sunlight. After the reeling of silk finish, the process of unwinding silk takes place from a cocoon. Silk thread is then bleached to get a fine silk fibre. The silk fibre is then spun into silk threads and we get silk.

Question 1: The natural fibre silk is obtained from?

Answer: The protein fibre of silk is produced mainly from fibroin. Silk is produced by certain insect larvae to form cocoons. The best and fine silk is obtained from the cocoons of the larvae of the mulberry silkworm Bombyx mori. To get silk it is reared in captivity (sericulture).

Answer: Silkworms experience different phases in their life cycles. These phases are egg, larva (worm), cocoon, pupa and the moth. Silkworms sleep four times in this phase. Silkworms moult during each hibernation. Each hibernation phase takes around 24 hours to 48 hours depending on the instars.

Question 3: Silkworm feeds on which leaves?

Answer: Silkworm moths eat mulberry leaves only. They feed twice a day to avoid the leaves becoming mouldy. Silkworms eat more as they grow. Silkworms slow down their eating capacity when they are ready to spin.