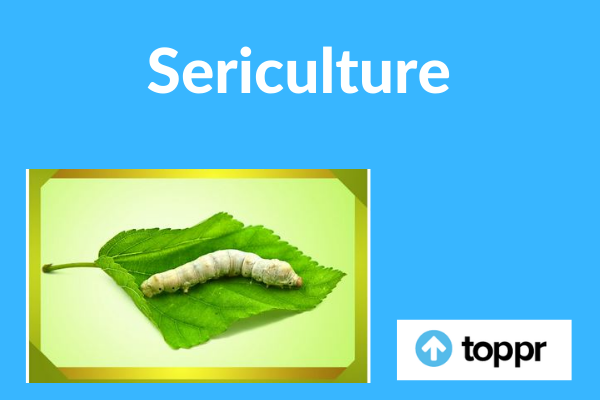 The process of breeding, growing, management of silkworms to get pure raw silk is sericulture. There are many different species of silkworms found. For example Mulberry silkworm, airy silkworm, giant silkworm etcetera. The insect which produces silk is called silkworm.

The production of silk originates from China. At that time silk was not only in use for clothing but also for a number of other applications. The colour of silkworm was an important guide of social classes during the tang dynasty.

The Arabs also begin to manufacture silk at the same time. As a result of the spread of sericulture, Chinese silk exports became less important, although they still maintained dominance over the luxury silk market. During the 16th century France joint Italy in developing a successful silk trade, do the efforts of most other nation to develop a silk industry of their own were unsuccessful.

To obtain silk mood are reared and their cocoons are collected to get silk thread.

More than 500 species of wild silkworms exists in the world, all do only a few are used to produce clothes. These 2 are as follows:

Bombay Mori is popularly called The Chinese silkworm or Mulberry silk mood. It is well known for silk. Mori is caterpillars that are about 4 centimetres long, including their horned tail. They are buff coloured and have Brown lines on their whole body. It is a native species of China and is famous for silk in Japan, India, Korea, Italy etc. It feeds on Mulberry leaves so it is also called Mulberry silkworm. Also, it is one type of mono figures insect which continuously feed on the Mulberry leaves. Hence it is called Veracruz feeder. Bombyx Mori has several races and varieties.

The Life Cycle of Bombyx Mori

In silk moth the sexes are separate. The development includes a complicated metamorphosis. After fertilization, each female moth lays about 400 to 500 eggs. These eggs are placed in the cluster on the leaves of the Mulberry tree. The eggs are smaller, over and usually yellowish. The egg contains a good amount of yolk and is covered by a smooth hard shell. After laying the egg the female mode doesn’t take any food and dies within 4 to 5 days. In the univoltine the may take a month because overwintering takes place in this stage but the multivoltine Broads come out after 10 to 15 days. From the egg hatches out lava called caterpillars. The larva of the silkworm is called Caterpillar larva.

The newly hatched larva is about 400 to 600 mm in length. It has a rough, wrinkled, hairless and yellowish or white worm-like body. The body of larva is the distinguished table into the prominent head, segmented thorax and abdomen. The abdomen consists of 10 segments of which first 9 are marked while the 10th one is indistinct. The 3rd, 4th, 5th, 6th and 9th abdominal segment bear ventrally appear of unjointed appendices. These are called prolegs. The larval life lasts for 23 weeks. During this. The larva moults 4 times. After each moult, the larva grows rapidly, a full-grown larva is about 800 centimetres long. A pair of long sac-like silk gland now develops into the lateral side of the body. These are modified salivary glands. The full-grown larva now stops feeding and hide in a corner under the leap.

Now it begins to secret the clear and sticky fluid of its celebrity glance through a narrow pour called spinneret situated on the hypopharynx. The sticky substance turns into a fine long and solid thread. The thread becomes wrapped around the body of the Caterpillar larva farming a complete covering called a cocoon. The cocoon formation takes about 2-3 Days. It serves a comfortable house for Caterpillar larva. The cocoon is a white or yellow thick Oval capsule which is slightly narrow in the middle. It is formed of a single long continuous thread pull stop the outer thread which is initially filament of the cocoon is irregular but the inner ones forming later the actual bed of the pupa.

Eri silkworm is mainly reared on castor plant. The scientific name of Castor plant is Samia Cynthia Ricini. It produces silk which is white or brick red. It is polyphagous it means that it doesn’t include a single plant but can also feed in various plants. Castor is more prominent but  Its cocoon is not continuous as compared to the Mulberry silkworm. Its moth can emerge and pierced cocoon can be used. It’s male and female cocoon colour is Brown, black, green wings, white abdomen. In North India Brahmaputra, Hills of Meghalaya, Mizoram, Nagaland, Manipur, Arunachal Pradesh is famous for eri silkworm.

Q.1. What are the main uses of sericulture?

Answer. The main uses of sericulture are:

Q.2. What are the various species of silkworms?

Answer. There are many species of silkworms. Some of these are:

Q.3. What are the main hosts of eri silk?

Answer- Eri silk is reared on castor. Its scientific name is Ricinus communis. Some other hosts of eri silk are kesseru (heteropanax fragrant), tapioca (Manihot utilisima) and papaya ( Carica papaya ).