Crystallization is a complex process through which solid forms, where the atoms or molecules are strongly packed into a structure known as a crystal. Attributes of the resulting crystal depend largely on factors like temperature, atmospheric pressure, and within the case of liquid crystals, time of fluid evaporation. Crystallization is a chemical process in which the solid-liquid separation technique occurs. This process causes mass transfer of a solute from the liquid solution to a pure solid crystalline phase. 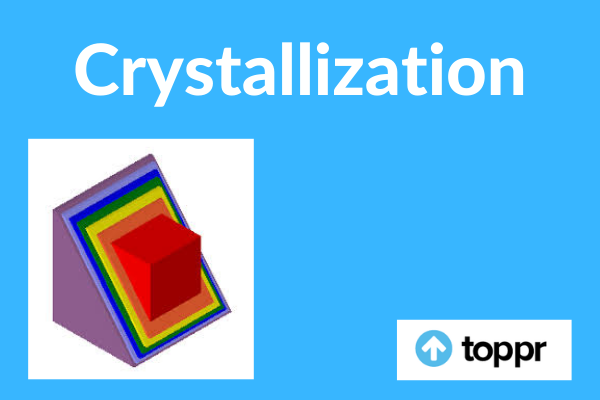 Crystallization occurs in two major steps. The first one is nucleation, which gives the looks of a crystalline phase from either a supercooled liquid or a supersaturated solvent. The second step is understood as crystal growth, which is the increase within the size of particles and results in a crystal state. A crucial feature of this step is that loose particles form layers at the crystal’s surface and lodge themselves into open inconsistencies like pores, cracks, etc.

The crystallization process consists of two major events. One is nucleation and the other is crystal growth which both are driven by thermodynamic properties also as chemical properties. Nucleation is the primary step where the solute molecules or atoms dispersed within the solvent start to collect into clusters, that become stable under the present operating conditions. These stable clusters constitute the nuclei. Therefore, the clusters got to reach a critical size so as to become stable nuclei. It’s at the stage of nucleation that the atoms or molecules arrange during a defined and periodic manner that defines the crystal structure.

Crystal growth refers to the increase in the size of the nuclei which is able to achieve the critical cluster size. Many compounds have the power to crystallize with some having different crystal structures, a phenomenon called polymorphism. Certain polymorphs can be metastable, meaning that although it’s not in thermodynamic equilibrium, it’s kinetically stable and requires some input of energy to initiate a change to the equilibrium phase.

Crystal formation takes place through various methods, such as cooling, evaporation, the addition of a second solvent to scale back the solubility of the solute, sublimation, solvent layering, changing the cation or anion, also as other methods. An old laboratory technique for crystal formation is to dissolve the solid during a solution during which it’s partially soluble, usually at high temperatures to get supersaturation.

The most common equipment for maximum industrial manufacturing of crystallization is Tank crystallization. It’s an old method still utilized in some specialized cases. Saturated solutions, in-tank crystallization, are allowed to chill in open tanks. After a period of your time, the main liquid is drained and therefore the crystals are taken out.

There are many samples of natural action that involve crystallization. Geologic time scale process examples include:

Now, maximum processes that yields more perfect results have been achieved by applying heat, where crystals usually form at lower temperatures—especially by supercooling. This process somehow primarily appears to violate the second principle of thermodynamics. However, thanks to the discharge of the heat of fusion during crystallization, the entropy of the universe increases. Thus this principle remains unaltered.

When the molecules of a pure, perfect crystal, is heated by an external source, the crystal becomes liquid. In liquid form, the complicated architecture of the crystal collapses. When the liquid crystal cools down, the molecules again return to their crystalline form. It happens once the temperature falls beyond the turning point. This is often because the thermal randomization of the environment compensates for the loss of entropy that results from the reordering of molecules within the system. The character of a crystallization process is governed by both thermodynamic and kinetic factors, which may make it highly variable and difficult to regulate.

Secondary nucleation is said when a crystal growth is initiated with contact with other existing crystals or “seeds”. Contact nucleation has been found to be the foremost effective and customary method for nucleation.

Once the first basic small crystal forms, it acts as a convergence point for molecules of solute touching – or adjacent to – the crystal in order that it increases its own dimension in successive layers. There are certain physical factors that influence the rate of growth like, the physical phenomenon of the solution, pressure, temperature, relative crystal velocity within the solution, Reynolds number, then forth.

There are two main families of crystallization processes:

Cooling crystallization – The cooling crystallizers are usually tanks in which a mixer is given for internal circulation, where temperature decrease is obtained by heat exchange with an intermediate fluid circulating during a jacket. These simple machines are utilized in batch processes, as in the processing of pharmaceuticals and are susceptible to scaling.

Evaporative crystallization – Most industrial crystallizers are of the evaporative type, like the very large common salt and sucrose units, whose production accounts for quite 50% of the entire world production of crystals. The foremost common type is that the forced circulation (FC) model.

Q.1. What is the significance of crystallization?

Answer – Crystallization is in use as a purification technique to separate the product from the impurities and process solvent. Mixing of the materials during crystallization is vital in facilitating good heat and mass transfer.

Q.2. What are the disadvantages of crystallization?

Answer – Below are the disadvantages of crystallization,

Q.3. What is class9 crystallization?