When we talk about the structure of a solid, especially a crystalline solid, we talk about the uniformity of their structure and arrangement of atoms. However, there are certain defects in this structure, that give solids certain characteristic features. Here we will learn particularly about point defects.

Defects in a Solid

Our main focus today will be to learn about point defects. Point defects usually occur when the crystallization has occurred very rapidly, not allowing a perfect crystal arrangement to form. Although it should be noted there are imperfections in even during a slow crystallization. There are mainly three different kinds of point defects. Let us study each of them.

Stoichiometric compounds are those who maintain their stoichiometry. That means they maintain their ratios of cations and anions as indicated by their chemical formula. The defects in the solid do not affect this ratio. They are of various kinds, such as 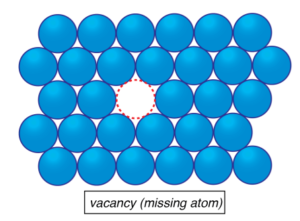 Here the lattice site is simply vacant, which means there is a missing particle. In a perfect crystal, there would not be this vacancy. This defect will lead to a reduced density of the solid. Some surrounding particle may move to fill in the gap, but the vacancy will only shift in the opposite direction, Also the solid structure of the crystal will ensure that the particles surrounding the vacant spot do not collapse.

There is an unoccupied space at the very center of the cube structure of the solid. When the eight spheres of a unit cell meet at the center they leave a little space, the interstitial site. Sometimes another particle will occupy this space. This is what we call an interstitial defect.

These are extra atoms or molecules or ions that occupy space which was supposed to be empty, which is why it is a defect. The density of the solid also increases due to such defects.

When a cation is missing from its normal position and has instead occupied an interstitial site it is a Frenkel Defect. Here the electrical neutrality will be unaffected. Also, it is usually cations that cause this defect since they can easily fit in the interstitial site due to their small and compact size.

Here no particles are actually missing, only the position is wrong. So the density of the solid will not change. It usually occurs in compounds where there is a significant size difference between cations and anions. Some examples are AgCl, AgBr etc. 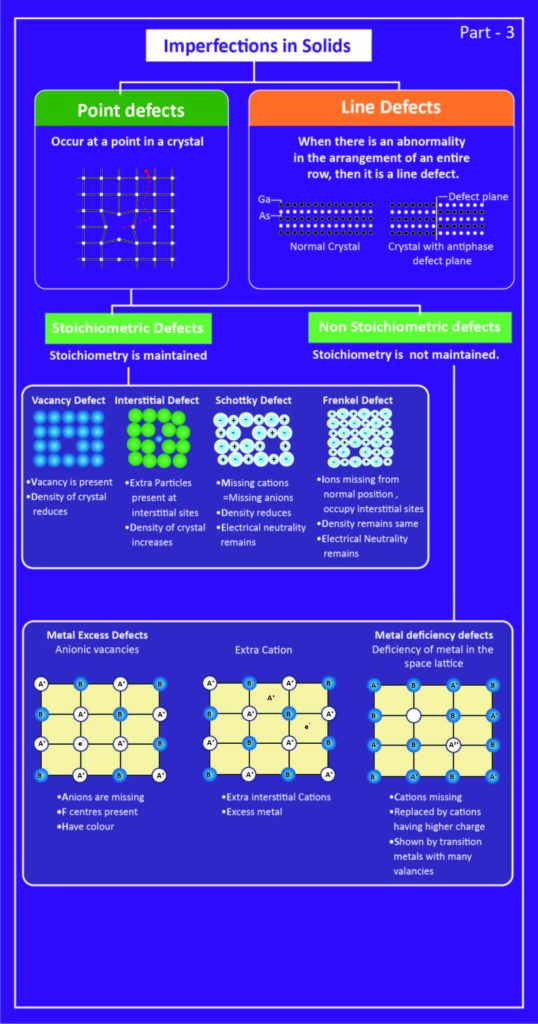 These defects will change the ration of ions in the solid. The number of cations and anions will not reflect as stated in their chemical formula. This imperfection is generally found in a large number of inorganic compounds. There are mainly two types of non-stoichiometry defects. Let us take a look.

Here there is a surplus of metal ions in the space lattice. This can happen in one of two ways;

In such compounds, there is less metal than its ideal stoichiometric proportions. Sometimes a positive ion is missing from the lattice site, but the neutrality of the solid will remain same as a neighbouring ion will take up two charges. The metal deficiency defect is normally found in Transition Elements, that have the ability to have multiple valencies.

Q: Which defect in any crystal lowers its density?

Ans: The correct answer is “A”. In Schottky defect, the same number of cations and anions are missing from the lattice. Hence this defect will decrease the density.