We are all aware of magnets, and you also probably know the metals that are magnetic. But did you know that the magnetic property of a solid is due to its atomic structure? Let us take a look at the different types of magnetic solids.

This magnetic behaviour of the electrons of an atom is due to the movement patterns. They have specifically two types of movements, 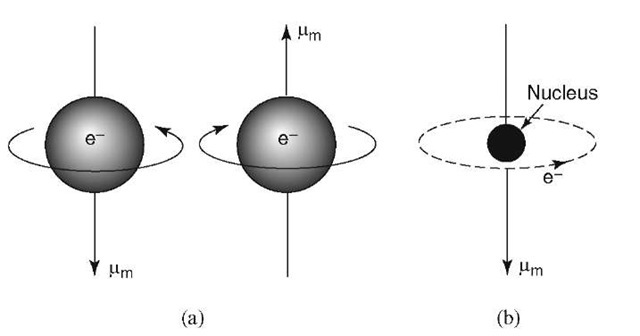 Paramagnetism is due to at least one pair of unpaired electrons in its orbit shell which get magnetized in the magnetic field. Some common examples are O2, Cu2 etc. These paramagnetic substances find a variety of applications in electronics. Just like paramagnetism, in diamagnetism too the substances are magnetized in an external magnetic field. But diamagnetic solids are repelled in the field. The magnetic property effected in them is in the opposite direction of the magnetic fields and thus they have a repulsive force.

In diamagnetic substances, all electrons in their last shell are paired, there are no valence electrons. This is the reason that the magnetic moment of their atoms is nearly zero. Examples are substances like Sodium Chloride, Benzene etc. Being such bad conductors, we use them as insulators.

It is a widely believed theory that the ferromagnetic structures have certain special characteristics. They have what we call “domains’ which is a special grouping of metal ions. Each domain is similar to a small magnet. In an electromagnetic field, these domains rearrange themselves and align themselves with the magnetic field. In a non-magnetized metal, these domains are randomly arranged and it cancels out their magnetic properties.

The examples of ferromagnetic solids include Cobalt, Nickel, Chromium Oxide etc. And they have widespread industrial and every day uses.

In antiferromagnetism, the domain structures of the solid are very similar to those of ferromagnetic solids. But here the domains are oppositely oriented. This means they cancel out each other’s magnetism.

These substances occur when magnetic moments are aligned in both directions (parallel as well as anti-parallel) but in unequal numbers. These are weakly attracted to magnetic fields. Also on heating, these substances will lose their ferrimagnetism altogether. Examples are magnetite and ferrites of Zinc and Magnesium.