Carbon monoxide (CO) is an odourless, colourless, and tasteless, flammable gas slightly less dense than air. It is harmful to animals who use haemoglobin as an oxygen carrier when encountered in higher concentrations to cause carbon monoxide poisoning at concentrations above 35 ppm. Some carbon monoxide is also released in low quantities in normal animal metabolism and has some normal biological function. It is spatially variable and short-lived in the atmosphere, playing a role in ground-level ozone production. 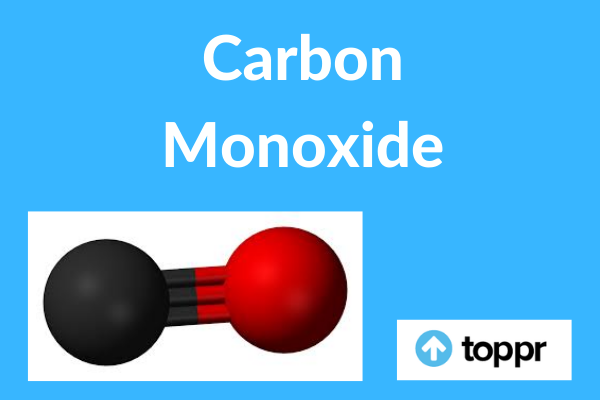 What is Carbon Monoxide?

Carbon monoxide consists of one carbon (C) atom and one oxygen (O) atom. It bonds by a triple bond consisting of a net two pi bonds and one sigma bond. It is known as the simplest oxocarbon and isoelectronic with other triple-bonded diatomic compounds, containing ten valence electrons such as cyanide anion, nitrosonium cation, and molecular nitrogen. The carbon monoxide ligand is called carbonyl in coordination complexes.

About half of the carbon monoxide throughout Earth’s atmosphere is from fossil fuel combustion and biomass (such as forest and bushfires). Most of the remaining caused by various chemical reactions of organic compounds emitted by human activities and plants. And once released into the atmosphere, it has an indirect effect on the radiative forcing process, a mechanism that triggers climate change.

Humans use carbon monoxide as a supply in several other industrial chemical manufacturing processes and in metallurgy. Carbon monoxide can also be used in modified atmosphere packaging to avoid any spoilage of food products.

In 1776, de Lassone [fr], a French chemist, produced CO by heating zinc oxide with coke but falsely assumed that the gaseous substance released as hydrogen because it burned with a blue flame. The gas was described as a carbon and oxygen-containing compound by the Scottish chemist William Cruickshank in 1800.

During the Second World War, usage of a gas combination containing carbon monoxide was common for running motor vehicles in regions of the world where petrol and diesel fuel were scarce. Carbon monoxide usage was on a large scale during the Holocaust in several Nazi German extermination camps, and the most notable of which were gas vans in Chełmno and the “euthanasia” Action T4 program.

Production of Carbon monoxide occurs due to partial oxidation of carbon consisting compounds. It forms where there is not enough oxygen to generate carbon dioxide, such as using an internal combustion engine in an enclosed environment. In the presence of oxygen, even atmospheric concentrations, carbon monoxide burns with a blue flame that produces carbon dioxide. Processes of modern industrial technology, like iron smelting, also emit carbon monoxide as a by-product. During oxidative processes in chemicals manufacturing, a significant quantity of CO production takes place as a by-product.

The world’s primary source of carbon monoxide is naturally occurring due to photochemical reactions in the troposphere, which produces around \({5 \times 10^{12}}\) kilograms per year. Other such natural sources of Carbon Monoxide (CO) are forest fires, other means of combustions, volcanoes, and carbon monoxide-emitting compounds.

There are several methods for producing carbon monoxide (CO)

The simple method for producing carbon monoxide in the laboratory is dehydrating the formic acid or oxalic acid, e.g. concentrated sulphuric acid. Another simple technique is to heat an intimate mixture of powdered zinc metal and calcium carbonate that releases CO and leaves zinc oxide and calcium oxide behind:

The primary industrial source of CO is the producer gas, a mixture mainly consisting of carbon monoxide and nitrogen, produced by burning carbon in the air at high temperatures when carbon is abundant. In the oven, the air flows into the coke bed. \({CO_2}\) produced initially is balanced with the remaining hot carbon to emit CO. The reaction of \({CO_2}\) with carbon to release CO is known as the Boudouard reaction. CO is the predominant element produced when heated over \({800 \degree C}\):

Another method is “water gas,” a combination of hydrogen and carbon monoxide created by the endothermic reaction of steam and carbon:

Carbon Monoxide is known to be useful in several ways. Such uses are:

Q.1. What is the impact of carbon monoxide on the human body?

Answer. Carbon monoxide has positive and negative human effects. As we know, that increased levels of carbon monoxide in red blood cells reduce the amount of oxygen haemoglobin carries in the body. The result is that vital organs, such as the brain, the heart, and the nervous tissues, cannot function actively due to a lack of oxygen present in the body.

Answer. Carbon monoxide is toxic when inhaled because it displaces the oxygen present in the blood and eliminates oxygen from the heart, brain and other vital organs. Within minutes, immense amounts of CO can invade your body without warning, causing you to lose consciousness and suffocate. CO toxicity is also a known particular threat to the fetus.

Q.3. Is it possible to smell carbon monoxide?

Answer. Carbon monoxide is a colourless, odourless gas produced from a carbon-containing combustion material. You cannot smell it or taste it, but research shows that it can kill a person when they come in contact with higher concentrations. It is known to be severely toxic. CO is also known as the silent killer as it is odourless, tasteless and colourless.

The most usual side effects of carbon monoxide poisoning often resemble other forms of poisoning and infections, involving symptoms such as nausea, headache, dizziness, vomiting, exhaustion, and a feeling of weakness, loss of consciousness, difficulty in breathing. Sometimes in severe cases, it even leads to death.