If you are planning to construct a house, obviously there is a need to manage a large number of bricks. This is because it can be tagged as the building block to your well-planned shelter. Similarly, atoms are the building blocks of matter which exist around us. Think of anything, and it would be surely formed out of atoms! Crazy right? Let us try to understand this concept in-depth for gaining a precise idea about their existence and know what is an atom.

What is an Atom?

What is an atom? – an atom is the smallest possible amount associated with a chemical element. For example, an atom of gold can be called as the smallest quantity of gold you can feasibly have. The word ‘small’ literally points out to nanoscopically tiny! An atom is thousands of times smaller than a human hair. 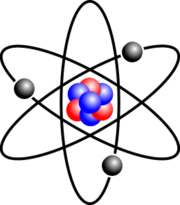 Hence, there is no chance you can see one without the help of a supremely powerful electron microscope. If you rip apart a variety of things, it would be revealed that all matter present around us is formed from different types of atoms. For example, living things are usually made from atoms hydrogen, carbon and oxygen.

It is vital to note that, these are only three of the 100 chemical elements which have been discovered by scientists. You can virtually think of making anything by joining atoms from different elements similar to LEGO blocks.

Parts of An Atom

Atoms hold three different subatomic particles present inside them; namely, protons, electrons, and neutrons. The neutrons and protons are wrapped together in the center of an atom. This region is called as the nucleus. On the other hand, the electrons that are quite smaller, speed around the outside.

Whenever people draw structures of atoms, it is shown that electrons spin in orbits around the nucleus. To be precise, electrons move quickly that you’ll never know where there are at different moments in time.

Watch Videos on Atom and Molecules –

How To Know If Atoms Exist?

If we cannot see atoms, then how’d we know it actually exists? Science is known to offer pieces of evidence for each of its concepts. Hence, the evidence to prove atoms really exist is offered in a variety of forms. Scientists have actively split big atoms into smaller versions.

Based on a very popular series of experiments from the early 20th century, Ernest Rutherford led the team which fired particles towards atoms and observed them carefully. It revealed how orbits were arranged in the interior of a typical atom.

Furthermore, some substances are known to be radioactive; that is, they naturally fragment into simpler substances and emit tiny particles in the process. Once again, all of this makes sense when atoms exist and they are made from smaller particles.

In addition, there are numerous shreds of evidence to prove the presence of electron particles. Their contribution to power things like magnetism and electricity is quite renowned.

Q1. What is an electric charge?

Q2. What all charged particles does an atom contain?

Ans: Proton and electron particles are the charged particles present in an atom.