Basically, all the people in a village who are of whatever age and are registered as voters form the concept of a group for the welfare of the village which is known as Gram Sabha. So a meeting of all the adults who live in an area covered by a panchayat is called a Gram Sabha. This could be only one village or few villages.

What Does The Gram Panchayat Comprise of?

Each village is divided into smaller units called Wards. Each ward selects or elects a representative who is known as the Ward Member Or Panch. All the members of the Gram Sabah also elect a Sarpanch who is the president of the Panchayat.

It comprises of the Sarpanch and the Panch which is elected for 5 years. Gram panchayat has a Secretary who is also the secretary of the Gram Sabah. This person is not an elected person but is appointed by the government. He is responsible for calling the meetings of the Gram Sabha and Gram Panchayat and keep a record of the proceedings.

In the Gram Panchayat, various issues are discussed like

For example, if a village is having water problem what will be the alternative ways to develop. Different panch will come with different ideas like using the hand pump, checking dams and rainwater harvesting methods, making tube-wells or wells in the village. Now the Gram Sabha will select the best idea and try to work on it.

Thus the Gram Sabha is a key factor in making the gram panchayat to play its role and be responsible. It is the place where all plans for the work of the gram panchayat are placed before the people. Gram Sabha prevents the panchayat from doing wrong things like misuse of money for favouring certain people. It also keeps an eye on the elected representatives and in making them responsible to the persons who elected them.

For example, many people who are below poverty line and really in the need of BPL facilities, many times are not able to avail the facility just because of the corrupt people. At that time by keeping a track on the misuse of money and the undue favour done to certain people, Gram Panchayat plays an important role.

The Work of the Gram Panchayat includes:

Sources of Fund for Panchayat

As we saw that panchayat system works as various Ward Sabha or Gram Sabha.  This Gram Sabha is headed by the Gaon Panchayat at village level and looks after the village level responsibilities. 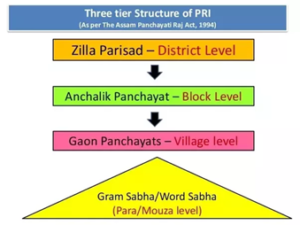 Based on the Indian Constitution this panchayat has its own laws. The main idea is to provide more and more space for people to participate and raise their voices in the villages to bring development in the country.

Ans: Main functions of the Gram Panchayat are:

Q2. Name the three levels of the Panchayat.

Ans: The three levels are:

What do you mean pardhan in gram Panchayat?

Thanks for the information