You know how the famous saying goes, India is not poor Indians are. This is something you can see while simply taking a walk down your colony. Many homeless and destitute are out on the road begging for alms. There are many causes of poverty in India. We will learn about these causes of poverty in the current chapter.

When we study economics, the assessment of poverty is crucial to understand the rate of development in a country. Let us understand first who are poor and how do we define poverty and the causes of poverty.

In simplest of terms, we can say that poverty refers to the inability of a person to meet the basic needs of life viz. food, clothing and shelter. Those who cannot afford these are considered poor. Or in more technical terms, below the poverty line. 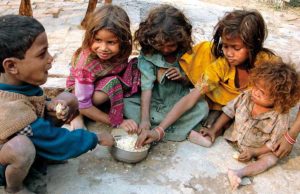 Economists have further disintegrated poverty into several parts, here we’ll discuss some of them one by one.

As the name suggests, it means poverty in comparison to others. It will vary from region to region. Relatively poor are those who can manage the basics but are still not quite into the category of middle class.

This refers to people who are living below the poverty line. We measure absolute poverty on the basis of two things:

Let us elaborate further on these two criteria.

Going by the above explanation, further, we assess poverty of a family based on their capacity to spend a minimum amount per day as their consumption expenditure. This amount is set by the government for both rural and urban poor and keeps changing annually or biannually depending on the inflation rate and other factors.

The poverty line thus refers to a line which portrays the average per capita expenditure needed by a person to meet their basic needs. This per capita is calculated on a monthly basis. As per the Tendulkar committee, the poverty line has been set as 816 rupees in rural areas and 1000 rupees in urban areas as monthly income.

Anything below this is poor. This amount keeps changing. According to the latest survey, about 32% of Indian population is below the poverty line.

The government set up a Committee headed by Suresh Tendulkar, which was the Tendulkar committee. This committee did a study and came to a conclusion that we could determine poverty line based on the above two criteria of calories intake and expenditure potential for consumption needs.

The committee determined that the ideal calorie intake for a person to not be in the poverty line is to be able to consume 2100 calories per day in urban areas and 2400 in rural areas.

The government on its part keeps on attempting to fight poverty and combat this issue by coming up with new schemes. The approach adopted by the government may be categorized as under:

One of the major causes of long persisting poverty in India is the vicious circle of poverty enveloping us. Vicious circle refers to the phenomenon of a self-enforced situation due to which a circular motion of poverty comes into existence. As part of this, a poor remains poor and poverty continues, so does under development.

An example of a vicious circle would be, where the government provides funds for the creation of medical benefits based on statistics of the number of people in poor families. By the time the funds reach them, the population increases considerably leading to a shortage of funds.

As a result, the poor are not able to use the benefits and thus kids remain weak and unhealthy. There are many similar reasons which induce the circle to remain. Until and unless some stern steps take place on part of government along with strict implementations, it is unlikely that this vicious circle will break.

There are several causes that lead to poverty. Some of these are listed here:

Q. Why is the calorie-based norm not adequate to identify the poor?

Ans: The calorie-based norm is not adequate to identify the poor because of the following reasons: