Education is a very important factor in the economic development of any country. India since the early days of independence has always focused on improving the literacy rate in our country. Even today the government runs many programs to promote Primary and Higher Education in India. Let us study more about them.

Human Capital and Economic Growth stay hand in hand together, keeping an eye on the development of the country. Long back the Indians recognized the importance of human capital. The seventh five-year plan dictates, “Human resources development has necessarily to be assigned a key role in any development strategy, particularly in a country with a large population”.

Looking at the below-mentioned points, one can certainly say that both, human capital and economic growth are interdependent on each other.

Education in India means the process of teaching, learning, and training of human capital in schools and colleges. This improves and increases knowledge and results in skill development hence enhancing the quality of the human capital. Our government has always valued the importance of education in India and this is reflected in our economic policies.

Growth in Government Expenditure on Education

There are two areas where government expresses there expenditure.

Expenditure on Elementary Education in India 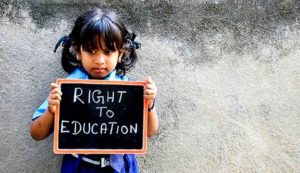 The education commission (1964-66) recommended that at least 6% of GDP should be spent on education to make a recognizable growth rate in education. In December 2002, the government of India, through its 86th amendment of the Constitution of India, declared for free and compulsory education as a fundamental right to all children in the age group of 6-14 years.

The Tapas Majumdar Committee was appointed by the government of India in the year 1998. The committee estimated an expenditure of Rs. 1.37 Lakh crore (approx) for 1998-99 to 2006-07, to cater all Indian children of 6-14 years age group, under the umbrella of school education.

Currently, the expenditure is around 4%, which has to be increased to 6% to reach desired results in years to come. Government levies education cess at the rate of 2% on all union taxes. The revenues from education cess will be earmarked for spending on elementary education.

Barometers of educational achievement in a country are:

Indian government considers education as a key area where drastic growth and development is required. So various future prospects have been considered and policies are drafted. The vision is to ensure that education in India is of the highest quality and available to the whole population without discrimination. Let us look at some projects the government wishes to implement successfully.

1. Education for all – A Dream

Though the education level has increased for both youth as well as adults, still the number of illiterates is as much as the population was at the time of independence. The constituent assembly passed the Constitution of India in the year 1950. Free and compulsory education for the children till 14 years of age within 10 years from the commencement of constitution was noted as Directive Principal of the constitution. Following are the factors which make education for all a dream:

The differences between male and female are reducing and the same can be seen in literacy rate, showcasing a development in gender equity. Still, hard work left to promote the education of women. There are various reasons, such as:

Therefore, we cannot feel satisfied with the upward movement in literacy rate as long miles to go for gender equity. Kerala, Mizoram, Goa and New Delhi are having high literacy rate, whereas, Bihar, Uttar Pradesh, Arunachal Pradesh and Rajasthan are educationally backward states. Social and Economic Poverty are main reasons for educational backwardness.

People in India face great difficulty to reach the higher levels in the current education system. As per National Sample Survey Organization data, in the FY 2007-08, the unemployment rate was 18.10% for youth with education up to secondary level. Whereas unemployment rate for youth with education up to primary level was only 11.60%. The government should take emphasis on allocation of higher education and improve the students.

Q1. What is Education? What are its objectives?

Solution: Education In India mean, the process of teaching, learning and training of human capital in schools and colleges. This improves and increases knowledge and results in skill development. Objectives of Education

All above produces good citizens.