Macroeconomics is the other side of the coin called economics, microeconomics being one of the two sides. It implements the economic theory by widening its approach, to focus on issues of the economy as a whole unit rather than the individual units. The recent change in tax regime by the Indian government i.e the introduction of GST is one such example of things that fall under macroeconomics. So let us go ahead and understand what macroeconomic theory is about. 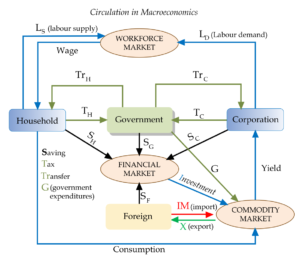 The two main tools of macroeconomics are – aggregate supply and aggregate demand. It is also known as the income theory.

The Need of Macroeconomics

For example, microeconomics explains that to earn maximum profit producers should decrease supply when prices are low and increase supply when prices are high, but if all individual suppliers decrease the supply of a commodity, then collectively the overall supply would change, and this will have effects on income, expenditure, taxation policies etc. Thus to overcome the shortcomings of microeconomic theory, the macroeconomic theory came into existence which focuses on aggregates and discusses the welfare of the economy as a whole.