The Theory of Demand and Supply is a central concept in the understanding of the Economic system and its function. The quantity demanded of a good or service is the amount that consumers plan to buy during a particular time period, and at a particular price. In the following section, we will see how the concept of supply and demand are related to each other and how they affect each other. Let us begin!

Theory of Demand and Supply 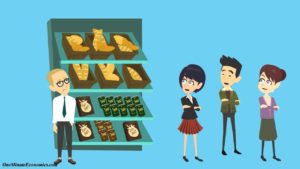 The market is governed by the law of demand. First, let us define what we mean by demand in terms of the market:

Demand for commodity implies (i) the desire to acquire it, (ii) willingness to pay for it, (iii) ability to pay for it. The Law of demand states that:

The relationship between Price and quantity demanded is an economic law. The quantity of a good demanded per period relates inversely to its price, other things constant.

The law of demand results from (i) Substitution effect, (ii) Income effect.

When the price of a good or service rises relative to income, people cannot afford all the things they previously bought, so the quantity demanded of the good or service decreases.

The term demand refers to the entire relationship between the price of the good and quantity demanded of the good.

A demand curve shows the relationship between the quantity demanded of a good and its price when all other influences on consumers’ planned purchases remain the same.

An exception to Law of Demand: Giffen Goods

A Giffen good is one which people paradoxically consume more of as the price rises, violating the law of demand. For example, during the Irish Potato Famine of the 19th century, potatoes were considered a Giffen good. Potatoes were the largest staple in the Irish diet, so as the price rose it had a large impact on income.

People responded by cutting out on luxury goods such as meat and vegetables, and instead bought more potatoes. Therefore, as the price of potatoes increased, so did the demand.

The demand schedule is a table that shows the relationship between the price of the good and the quantity demanded.

The demand curve is a graph of the relationship between the price of a good and the quantity demanded.

The quantity of a commodity an individual is willing and able to purchase at a particular price, during a specific time period, given his/her money income, his/her taste, and prices of other commodities, such as substitutes and complements, is referred to as the individual demand for the commodity.

The total quantity which all the consumers of the commodity are willing and able to purchase at a given price per time unit, given their money incomes, their tastes, and prices of other commodities, is referred to as the market demand for the commodity.

An autonomous demand or direct demand for a commodity is one that arises on its own out of a natural desire to consume or possess a commodity. This type of demand is independent of the demand for other commodities.

Durable goods are those goods for which the total utility or usefulness is not exhaustible in the short-run use. Such goods can be used repeatedly over a period of time.

The demand for non-durable goods depends largely on their current prices, consumers’ income, and fashion. It is also subject to frequent changes.

Short-term demand refers to the demand for goods over a short period.

The long-term demand refers to the demand which exists over a long period of time.

Following are the main factors that influence the demand of an object:

If a firm supplies a good or service, then the firm:

1. Has the resources and the technology to produce it,

2. Can profit from producing it, and

3. Has made a definite plan to produce and sell it.

Resources and technology determine what it is possible to produce. Supply reflects a decision about which technologically feasible items to produce. The quantity supplied of a good or service is the amount that producers plan to sell during a given time period at a particular price.

The Law of Supply

The law of supply states:

A supply curve is also a minimum-supply-price curve. As the quantity produced increases, marginal cost increases. The lowest price at which someone is willing to sell an additional unit rises.

A Change in Supply

The six main factors that change the supply of a good are:

a. The prices of factors of production
b. The prices of related goods produced
c. Expected future prices
d. The number of suppliers
e. Technology
f. State of nature

Equilibrium is a situation in which opposing forces balance each other. Equilibrium in a market occurs when the price balances the plans of buyers and sellers.

Q 1: If the number of customers in the market increases suddenly, the supply will: