Many of you might be unaware that Sikkim is India’s first state that became fully organic (by December 2015). That means 7500 hectares of agricultural land relies on sustainable development. This has led to the subsistence of the fragile Himalayan ecosystem and also upgraded soil health. Let us learn about organic farming and sustainable development in India. And also about their interconnection.

Organic farming is a farming technique that sustains, enhances and maintains the quality of the ecosystem. Consequently, organic farming does not have harmful and deteriorating effects on the ecosystem. The traditional farming system focuses heavily on output. With the advent of green and the golden revolution, India was self-reliant and a major producer of various crops. It also introduced output oriented technologies like HYV seeds, new fertilizers, pesticides etc.

Of course, this changed the course of Indian agricultural history and pulled our country out from famines. But eventually, such techniques led to the deterioration of the various ecosystems. Thus organic farming, bringing eco-friendly techniques, began to change this aspect of traditional farming. 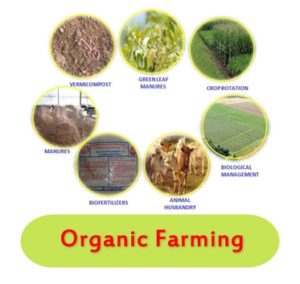 The Need of Organic Farming

Organic farming techniques can be incorporated because of the following benefits:

The Downsides of Organic Farming

The two big revolutions that changed the course of Indian agricultural history and brought with them various techniques and methods are – The Green revolution and the Golden revolution. So let us understand both of them through a comparative approach.

Emerging as a ray of hope in times of famines, the green revolution led to a sudden boom in the food grain stock of our country. As a result of this, we became not only self-sufficient but also a leading producer of food grains. The introduction of HYV seeds, new and effective fertilisers and pesticides, coupled with an effort to improve the state of infrastructure are the driving factors of this revolution. Consequently, India is now a leading producer of wheat and rice.

Information technology is one domain that is can help in the implementation of principles of sustainable development. In effect, IT provides us with the knowledge of vulnerabilities of an area along with the best-suited crops that can be grown without degrading that specific soil quality. It is capable of giving us information about the various changes and current conditions of the area we wish to cultivate upon.

IT can disseminate information about the weather, soil conditions, chemical composition etc. A good look at such evaluations helps us to plan our activities without altering the ecosystem. Lastly, IT effectively informs us about the emerging technologies which can be incorporated to increase productivity and profits, walking hands in hands with the motive of sustainable development.

Q: How does organic farming lead to sustainable development?

Ans: Organic farming does away with the harmful practices of conventional farming like the use of toxic fertilisers. In essence, organic farming is a farming technique which sustains, maintains and enhances the quality of the ecosystem. It does so without hampering the course of development. Therefore, it works along the lines of sustainable development.