Is it possible that the soil goes bad naturally? If so, how? What would happen if soil became less fertile? Well, the answer to this is a process known as ‘Soil Erosion’. But how does it occur? What is it? Let us know more!

The soil is the top layer of the earth’s surface. It is made up of dirt and rock. It is filled with air and life. A variety of organisms, like insects, earthworm, live in soil. For plants, soil serves as a storehouse of water and minerals needed for their growth. It also provides shelter to many animals that live on or in the soil. Without soil, there would be no grass, no crops, no trees, no food for us and other animals.

What is Soil Erosion

It is a process in which the top fertile layer of soil is lost. Due to soil erosion, the soil becomes less fertile. The top layer of soil is very light which is easily carried away by wind and water. The removal of topsoil by the natural forces is known as soil erosion.

Various agents, like wind, water, deforestation, overgrazing by cattle, etc., cause soil erosion. The various factors of soil erosion are:

When strong winds blow, the topsoil along with the organic matter is carried away by the wind. This happens more often when the land is not covered with grass or plants. Such conditions are very common in desert and semi-desert regions where strong winds blow very frequently.

When it rains in the hilly areas, the soil gets washed away towards the plains. The running water deposits the mineral-rich soil in the riverbed and over the years this deposition of soil can change the course of the river. This can lead to floods which cause the destruction of life and property. Water erosion leads to loss of agriculture potential. 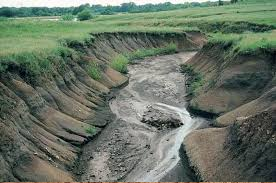 When cattle are allowed to graze on the same field repeatedly, all the available grass, including the roots are eaten by them. This makes the topsoil vulnerable to wind and flowing water, leading to soil erosion.

Humans have taken land from the forest to cultivate in order to feed the ever-increasing population and to build houses, industries, etc. Cutting down trees on a large scale for these purposes is deforestation. The roots of trees hold the soil together, thus preventing the soil from getting uprooted. When large areas of the forest are cleared, the topsoil gets eroded by wind and flowing water.

Soil erosion is caused by a variety of factors, including running water. Water erosion can be caused by raindrops, waves, or ice. The severity and kind of soil erosion caused by water are classified differently.

Soil erosion caused by the wind is especially prevalent in locations where natural vegetation is scarce. It’s mainly found near the sandy coasts of seas, lakes, and rivers in dry and arid places. After becoming loose, the soil particles are blown and transported away by the wind through:

Suspension-Smaller dirt particles are suspended in the air and drift with the wind like a thin crust, allowing them to be carried across vast distances.

Surface Creep-The wind just pushes or spreads the heavier soil particles that aren’t easily tossed up by the wind along the surface.

The Importance of Soil, Especially Topsoil

Insects and earthworms are among the species that dwell in soil. Soil acts as a reservoir for water and nutrients that plants require for growth. It also serves as a home for a variety of creatures that dwell on or in the soil.

Why Preventing and Stopping Soil Erosion is so Important”

Air and vitality abound in the earth. There would be no grass, no crops, no trees, and no sustenance for humans and other animals without dirt.

Planting new trees and plants is afforestation. We live because plants live. If the plants die, all living things will also die. Thus, whenever trees are cut down new trees should be planted. Planting trees in hilly areas are most effective for conservation. 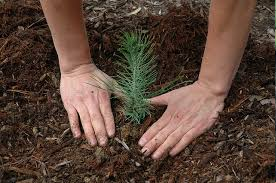 Between harvesting one crop and planting the next crop, the fields lie bare; there is a time period when the farmland does not have any crops. During this period, the farmer either grows grass or grows other crops to prevent soil from erosion. This helps the soil to regain the lost minerals.

In hilly areas, farming is done by cutting steps on the slopes of the hills. This slows down the flow of water and soil removed from one step is deposited on the next step. Thus, the soil is never completely lost. This is terrace farming. 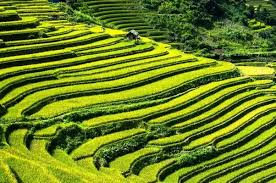 Dams are built to prevent floods, which not only damage the crops but also wash away the topsoil.

The cover of plants and trees around the field also breaks the speed of strong winds and protects the soil from being blown away.

Bib strong structure called embankments along the banks of the river can protect fields from the floods. These embankments prevent the fast overflowing rivers and rainwater from washing away a huge amount of rich fertile soil.

It is an annual tree planting festival started by the Government of India. The aim of this programme is to create awareness about the need for conservation of forest and soil. 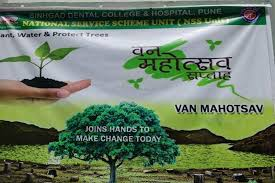 Q. In hilly area how can we conserve?

Ans: In hilly areas, farming is done by cutting steps on the slopes of the hills. This slows down the flow of water and soil removed from one step is deposited on the next step. Thus, the soil is never completely lost. This is terrace farming.