In the pre-independence era, farmers were exploited by traders and middlemen, trapping them into selling their produce for low prices than the existing market rates. They were also victims of faulty weighing machines and wrong accounting. Moreover, they did not possess storage facilities making then unable to hold back their produce to sell at a better price in future.

Henceforth, they were forced to sell their produce at whatever price which ultimately either led to losses or wastage of produce. Under such conditions, the state had to intervene in the agricultural market system to improve its efficiency.

The system began to reform for good, as the government decided to step in. The government took several steps to achieve the goal of a regulated and efficient market system. Firstly, markets were regulated to obtain transparent and orderly marketing conditions. Secondly, the provisions of improvement in transport infrastructure provided easier and new channels of connectivity.

The separation of these areas was now starting to diminish. Infrastructure was uplifted to reach better heights in reference to storages, processing units, warehouses etc. Also, cooperatives were set up that effectively bring together various farmers. This provides them with a common voice, helping them to get fair prices for their produce.

The cooperatives in Gujarat are a perfect illustration of the above-mentioned point. Lastly, measures taken by the government such as the assurance of minimum support price(MSP), maintenance of buffer stocks and distribution through PDS were a step in the right direction.

The shortcomings of changes in the market system soon became pretty much evident. Although an active regulation of markets has improved the scheme of things, the full potential is still to be realized. The improvement in infrastructure has been improving at a slow rate, causing serious wastages and problems.

The birth of various cooperatives have been the new idea for improvement, but eventually, they are receiving backlash for inadequate coverage of farmers and low levels of connectivity. The various policies introduced by the state have led to betterment. But private sector still controls a serious share of the trade. It becomes important to realize that a lot of work is left to be done for the agricultural market system.

The Hurdles against Improvement

In essence, the following obstacles are the ones we have to tackle first: 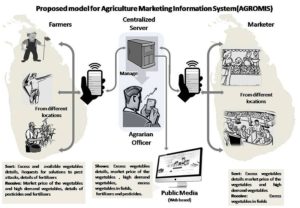 Amidst all the positives and negatives, various marketing channels with innovative and helpful ideas have emerged on the scene. They have been successfully linking producers to consumers eliminating the need for middlemen. Hence the money lost in commision now becomes a part of the profit for the farmers.

Some illustrations are Apni Mandi ( Punjab, Rajasthan, Haryana), Hadapsar Mandi(Pune), Rythu Bazars ( vegetable and fruit markets in Arunachal Pradesh and Telangana), Uzhavar Sandies( Tamil Nadu). Other channels involve various national and multi-national fast food chains reaching out directly to farmers. These companies enter into deals with farmers which require them to produce the output of a certain quality.

To encourage this culture, companies ensure to provide them with necessary products like good quality seeds. This also maintains a stable income for farmers, as they are paid according to a pre-decided price for their output.

Q: What are some obstacles agricultural marketing face?

Ans: Some of the hindrances that agricultural marketing faces are: