Even though the word altogether and the phrase “all together” are having the same pronunciation. They function in a different manner in the sentences. Therefore, these two words are commonly confused, but as we will see they are not interchangeable. This article will present Altogether vs. all together to remove the confusion.

The only difference which we may see is the space in the second one. Altogether is meant for the “completely,” or “all things considered,” or even as “on the whole.” Whereas, “All together” means “everyone together” or “everything together.” It is often known as that the whole isn’t necessarily the sum of its parts. That maximum applies when someone turns “every day” into “everyday”. And it is the same when we turn “all together” into “altogether”, then we get something completely different.

While these two words sound the same, still when spoken, they actually have visible differences in their meanings. Altogether is the adverb, and is a synonym of its fellow adverbs “completely” and “outright”. So, it means taken as a whole. Meanwhile, “All together” is a phrase which refers to an entire group, like a table of friends who are sitting in a group chat or everyone in a crowd. 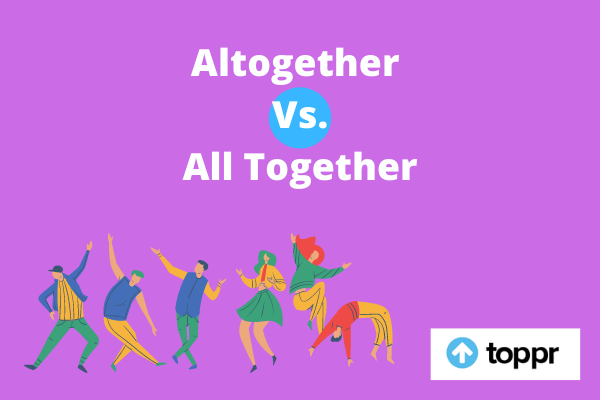 Altogether vs. All Together

Difference Between Altogether and All Together

Also, it is for referring to someone or something in the same place or time. Altogether and all together are those two terms which are commonly mixed up in the English language. The critical difference is how they are used in a sentence.

Remember that altogether is only used as an adverb in the sentences. It may be replaced in the sentence by “completely,” or “totally” as the single word. Use the phrase all together for all other usages in sentences. Think of all together as the “everything present” or also “all here.” All together refers to all the members of a group generally. It is not uncommon to see a noun or a verb between the elements of the phrase.

When to use Altogether?

What is the true meaning of altogether? Actually, it is an adverb with the meaning as “taken as a whole”, in such a way as to be synonymous with completely or totally. For example- Ram has altogether too many practices to be consorting with this bunch of hooligans. Also – The Company’s liquid assets are altogether worth over 150 million.

Sometimes, this word is used more closely approximates that of outright. For example – At the alumni banquet this year, informal dresses have been banned altogether.

Incorrect: His cars are all together worth more than your house.

Correct: His cars are altogether worth more than your house.

Incorrect: All together, I would say it was a fantastic evening.

Correct: Altogether, I would say it was a fantastic evening.

When to use All together?

What is the meaning of “all together”? It is a phrase which means “in the same place” or “at the same time” as a complete group. Bit, it is not used as a phrasal adverb. For example – Find the muddy towels, gather them all together, and then wash all with the hose.

Incorrect: The dirty clothes were collected altogether on the floor by the washerman.

Correct: The dirty clothes were collected all together on the floor by the washerman.

Incorrect: The girls were very happy when the mentor put them altogether in the same group.

Correct: The girls were very happy when the mentor put them all together in the same group.