There is a popular confusion in the English language regarding can not vs. cannot. Is cannot one word or the two words? Its answer is one word and that is most of the time. Cannot and can’t are having the same meaning, but can not appears differently in the sentence. Both cannot and can not mean that a person or object which is not having the ability to do something. We wouldn’t necessarily use them in the same contexts. Actually can’t is a contraction of cannot, and as such it is sometimes unsuitable for the formal writing. And also, in everyday writing and in speaking, it’s ubiquitous.

Thus, don’t use can not when you mean cannot. The only time you are likely to see can not be written as separate words, and it is when the word “can” happens to precede some other phrase that happens to start with “not”. This article will clear the confusion of can not vs. cannot. Let us understand this interesting fact. 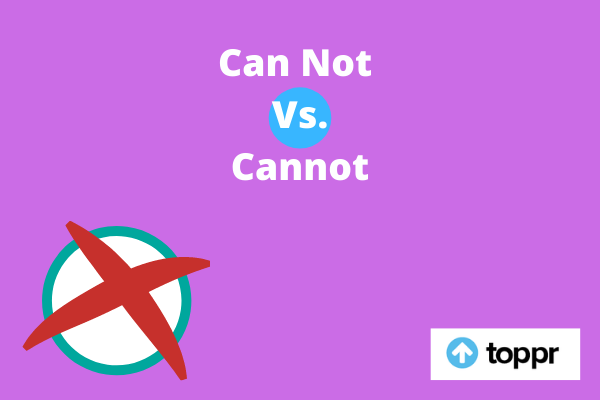 Can not vs. Cannot

Difference Between Can not and Cannot

Thus we may say that can’t is a contraction of the word cannot. And it is the best suited for informal writing. In formal writing and where contractions are frowned upon, then use “cannot”. It is also possible to write can not, but we generally find it only as part of some other construction like  “not only . . . but also.”

Also, cannot and can not are interchangeable as the expansions of the contraction can’t. But, the modern preference is to use “cannot.” Of the note, many spellcheckers even highlight that “can not” as an error. Actually, it is the first spelling and grammatical mistake which is very common.

Many times it can be seen in journals is the spelling for cannot. Cannot be one word as today and tomorrow. But, still, these are occurring. One can still grammatically use can not in some contexts. For example- Can you not shake your leg, as I don’t like this habit? In this example, someone can choose to not shake it rather than he is unable, and not for being incapable of shaking.

When to use Can not?

It is possible to see “can” and “not” as two separate words in sentences and especially with the correlative conjunction like “not only…but also.” There are many examples where can not is more suitable. Some examples are:

He can not only cook but also bake.

My pet dog can not only roll over but also play dead.

Everyone like that person who is not experts can not only understand but also become engaged by his work.

Obviously, in such examples, “cannot” as one word is not an option.

Incorrect: These plants can not survive in such cold conditions.

Correct: These plants cannot survive in such cold conditions.

Incorrect: Some sounds can not be detected by the human ear in normal conditions.

Correct: Some sounds cannot be detected by the human ear in normal conditions.

When to use Cannot?

Cannot actually means the inability of someone to do something. Also, this denial of permission to do something is like an incapacity to do or attain something. Cannot is used as the auxiliary verb and one of the thousand most frequently used words in the English language. This is also confirmed from the Oxford English Dictionary. So, the word cannot have been around since around 1500. And is used far more often than the word “can not”. For examples, we have:

He cannot wait until Tuesday to get his blood report.

He cannot imagine what will happen next in his journey.

In the above examples, it is visible that, cannot is a single word and well-suited according to the English literature

Incorrect: I can not wait two more days to get the report.

Correct: I cannot wait two more days to get the report.

Incorrect: Conflict can not survive without some proper participation.

Examples of Cannot – Using cannot in a Sentence:

Let us have some suitable examples:

Examples of Can not – Using can not in a Sentence:

Let us have some suitable examples: