Among and amongst are the similar-sounding words having different meanings. This article will explain among vs. amongst in detail with examples. We are using among or amongst to describe the collective relationships of the objects. Actually, among and amongst both are meant for the same thing. But among is the most common in use, particularly in American English.

Both words are the prepositions and their meanings are “into” or “surrounded by” or “in the midst of” and many more similar meanings. Among is the older version of the word and it was having its roots back to old English. Whereas, amongst appeared in Middle English. During this time period, the English language added sounds to many words to formulate the adverbs.

But, in modern English, we still have some words similarly, such as once, always, and unawares. Amongst, whilst, whence, and amidst may be considered as sounding similar, but they are still part of the language. If we are editing someone else’s work, then we might want to draw their attention to both the words. Also, amongst may sound old-fashioned, particularly for American readers.

Otherwise, we have to choose whichever word best suits in the given context. Perhaps, the rhythm and cadence of our sentence will decide about it. During the 19th century literature, there are several examples available of the usage of the word “amongst”. We will also see that, ultimately, it is entirely up to us whether we use “among” or “amongst”. Let’s understand among vs. amongst with learning! 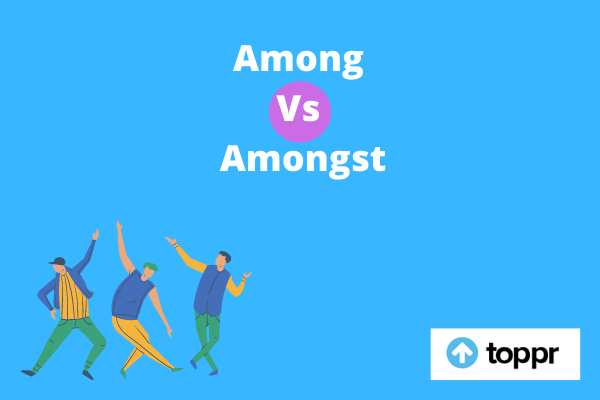 Difference Between Among and Amongst

Among and amongst are two varieties of the same preposition. Among is meant for “in the middle or included in a larger group of the people or things”. Also, among is commonly followed by some plural noun form.

Although both are having the same meaning, the frequency of its use is not the same. Among his much more popular compared to the “amongst”. The Oxford English Corpus had counted about 10000 appearances of amongst in American writing. On the other hand, among has appeared over 300000 times. This difference is less extreme if we see British English, but still among is always the most common. Due to less number of appearance, amongst can seem foreign entity or incorrect too.

Among: Among is used when talking about people or things that are having some similarities. And, also these are not distinct and are viewed as a group. Among can indicate that something belongs to a group. For example, there was not much unity among the committee members. One more example is that- she only ever felt easy and simple when she was among her friends.

There are several idioms that are using among like –“ Honor among thieves”, “To be first among equals”, “Count or rank among”.

Amongst: Later on, amongst, is the development and it is continuing along in the Middle English period. Amongst has the exact same meaning and even the same grammatical rules as among. The only one and most important difference is that its spelling is less common in both forms of English i.e. American and British.

How to Use Among?

Among them is used as the preposition in the sentences. Better to use most of the time. Also, use when we need to be very formal or to give the literary style to our saying.

Incorrect: These organizations were amongst those to indicate lower reputations.

Correct: These organizations were among those to indicate lower reputations.

Incorrect: The society all stared at me as I passed straight amongst them.

Correct: The society all stared at me as I passed straight among them.

How to use Amongst?

Amongst is also used as the prepositions in the sentences. Actually, amongst is mainly used in formal or poetic contexts.

Incorrect: I have heard a wild wind rushing among.

Correct: I have heard a wild wind rushing amongst.

Incorrect: I believed that my heart jumped up amongst my lungs.

Correct: I believed that my heart jumped up among my lungs.

Examples of Among – Using Among in a Sentence:

Examples of Amongst – Using Amongst in a Sentence: