People often have confusion about the words past and passed. This is because of their similar sound and similar meaning. In this article, we will explain past vs. passed. Past and passed are homophones and having almost identical sound, but having different definitions. Both past and passed are being used related to motion and time. The verb pass, when used in the present tense will look like for example, I will pass the ball to you.

Here, if we substitute the word pass for passed, then I passed the ball to you. It signifies that this happened previously. And thus, it has already happened. With the addition of “-ed” to the end of the verb pass, will make it passed. Whereas the word past is defined as gone in time and currently has no longer existing.

We may have an example for it, “In the past, people used to live differently.” Or, “Somesh struggled with his weight in the past.” In the word past, once we see the definition for this, all will become clear. Thus, “past” is mostly used to signify a point in time.

With the reference of time, we often have used that, the word past used to describe the time, “It is quarter past nine.” Clearly, it is describing something which has gone beyond time. It means we cannot mix these two words up. So it is very important to keep past and passed separately in our writing. Let us discuss Past vs. Passed. 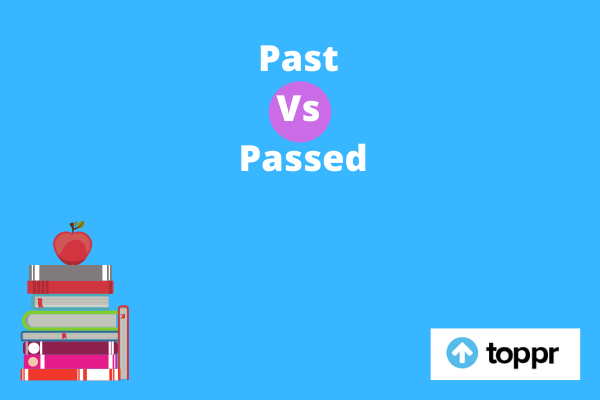 Difference Between Past and Passed

The difference between the past and passed is an interesting example of confusing words in the English language. Past vs Passed is a very commonly confused pair, so their difference is a must to know. The way to keep the meaning straight is to remember about the past only ever has that form. But passed is really just a tense form of the verb pass. Thus, it can take the forms of the pass, passes, or passing accordingly.

Passed is only a form of the verb “pass,” in the second or third form. On the other hand past word is the noun, adjective, preposition as well as adverb. It is clear that “Past”, will always have the same form irrespective of the sentence making or its tense.

Past: The word “past” has different meanings and related to “time before the present”. It also indicates the movement from one side of a reference point to the other side.”  We may use it as an adjective, an adverb, a noun, or a preposition.

Passed: The word passed is the past tense of the verb pass, which says about movement through or into a place or a time or to have happened. There are many sentences, where Pass and passed have many uses and also related to motion and time.

How to Use the Past?

One may use word past can be used as an adjective, a preposition, a noun, or an adverb.

As an adjective- some examples are as follows:

As a preposition- some examples are as follows:

As a noun- some examples are as follows:

As adverb- some examples are as follows:

Incorrect: I think that the juice bottle is passed its expiration date.

Correct: I think that the juice bottle is past its expiration date.

How to Use Passed?

To pass generally means to move past. And this is the point of the confusion. This is important to bear in mind that if we have used any verb of motion, then it will be partnered with the word “past” and not the word “passed.” For example:

Incorrect: The ships past each other in the daytime.

Correct: The ships passed each other in the day time.

Examples of Past – Using Past in a Sentence:

Examples of Passed – Using Passed in a Sentence: