Idioms/Phrases are widely asked in the bank PO, SO, SBI and RBI exams. In this article, we will list many phrases, use them in sentences and see what kind of questions are based on the knowledge of these Idioms/Phrases. All of the phrases that we will use in the articles have come at one point or the other in one of the exams that we are preparing for.

The dictionary definition of the word idiom is that idiom is a group of words established by usage as having a meaning not deducible from those of the individual words. It is an expression that has a specific meaning. For example, a sweeping statement is an idiom. It sounds like a statement that is very impressive, however, its meaning is exactly opposite. To make a sweeping statement means to make a thoughtless statement. So don’t be fooled by the people who tell you that there is a rule or a method that tells you what a given idiom means.

As this section forms the part of the vocabulary, you will have to memorize these idioms and their meaning. Let us state some idioms that have already been asked in the exams that we are preparing for.

Idioms and Their Examples 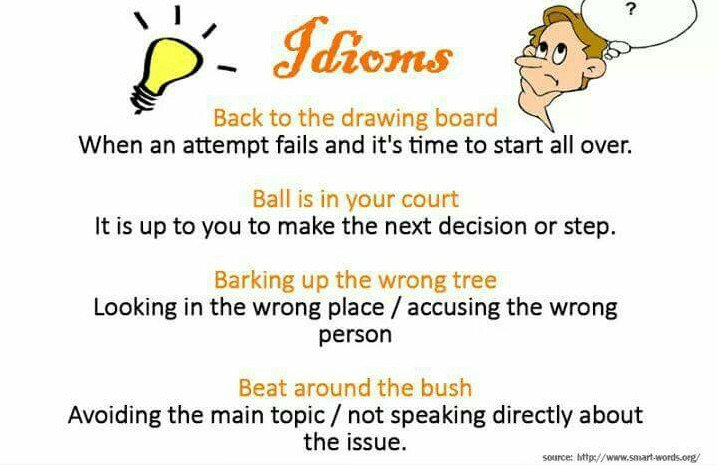 Let us state some examples that you will commit to your memory.

Similarly, we shall try and put forward a few such examples here. These examples will help us to know many idioms and their usage.

To take with a grain of salt.

A) Good and evil

B) Former and latter

C) To take with some reservation

D) To destroy before it blooms

Let something slip through one’s fingers.

A) To waste an opportunity to achieve something.

B) Start the day in a bad mood, which continues all day long.

C) To uselessly dwell on a subject far beyond its point of resolution.

Answer: The meaning of letting something slip through one’s fingers is to waste an opportunity to achieve something. So the option that is correct here is A)

In the following examples, select the correct representation of the word or the phrase.

He took the decision of his own accord.

Solution: The meaning of doing something on your own accord is to do something that one does with his own desire.

The people who think that there can be any prosperity without freedom are still in a fool’s paradise.

Answer: To live or to be in a fool’s paradise means to be living in an illusion. So the answer is A).

The order disqualifying the promotion of the clerk is kept in abeyance.

Answer: To be in abeyance means to be in a state of suspension. So the correct option here is A) In suspension.

I think the politician’s account of his education is a cock and bull story.

A) Absurd and unbelievable story.

B) Very strong and opinionated.

Q 1: What do you understand by the following sentence: “The President seems to have a seamy side”.

A) The President is a hardworking guy.

B) The President is an idiot.

C) The President is an unpleasant and immoral person.

D) The President has a tattoo.

Ans: C) The President is an unpleasant and immoral person.

Q 2: Pick the option that represents the meaning of the following sentence: The Economic Policies and the Social Policies should never be at loggerheads.

A) The Economic Policies and the Social Policies should be similar.

B) Economic Policies and the Social Policies should not be similar.

C) These Policies should be in disagreement with each other.

D) The Economic Policies and the Social Policies should never be in disagreement with each other.

Ans: D) The Economic Policies and the Social Policies should never be in disagreement with each other.