Many languages are having the facility to give gender to their nouns. But, this is not happening in English, though this was not always the case. Until about the year the 1200s, the English language had masculine and feminine nouns as in the French, Spanish, Italian, and German languages. Blond vs. blonde is a pair of confusing words having the same situation. We still are having some holdovers, and at least two of them related to the coloring of hair. But, as in so many things occurring in English, we are not really sure how to use them.

Hair the color of corn silk is termed as “blond,” and it is in its masculine form. On the other hand, if that hair is on a woman then a suitable feminine word is “blonde.” This article will explain blond vs. blonde with the help of examples.

According to Garner’s Modern American Usage, which says “blond” is preferred in all senses. Also, the Oxford English Dictionary says that “in Britain, the form blonde is now much preferred in all senses.” The Associated Press Stylebook says that use “blond” as a noun for males, whereas use it as an adjective for all the applications. For example- – Meera has blond hair. Mostly, we will use the feminine “blonde” as both a noun and an adjective without bothering about the sex of the person. 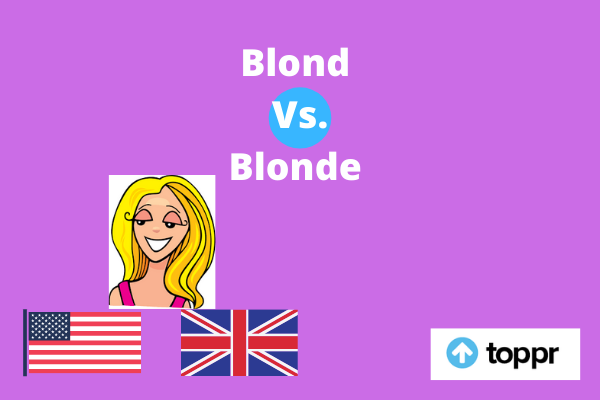 Difference Between Blond vs Blonde

As we all know that “blond” is the hair color. Its literal meaning is “light-colored,” It was first recorded in the English language during the mid-1400s. It is derived from the French blond. This refers to “light brown” and similar hues. Similarly, there is another word blond spelled with an extra “e”, which is “blonde”. Well, those French origins we were talking about are why the word has two different spellings in English.

Blonde and blond both words are the same in some manner. Also, a woman with blond hair is “une blonde” whereas a man “un blond”.  In the English language, if we are being technical about those words taken from French origins, then “blonde” as a noun or adjective is applicable to women or girls. Also, having light hair and usually fair skin with light eyes. It is meant for a man or boy with respect to “blond”. Therefore, it will be interesting to see that words like these maintain extraneous and confusing meanings. These are often just conventional distinctions according to gender.

When to use Blond?

The use of blonde as the noun is popular in reference to the female with blonde hair. It should be avoided because it can be interpreted as sexist. Generally, it is extended to the English as adjectives mainly in British English. Although blonde is more common than blond.

Still, in American and Canadian English, blond is more preferable over blonde in all cases. Whereas, though a minority of writers continue to observe the gender distinction. In any case, using “blonde” in reference to male hair is simply the wrong spelling. For example- My hair is very sandy blond, and his hair is skin silver.

Another one is – Meera gave blond curls a quick lift with her fingers in her hair.

Incorrect: A beautiful blonde with an amazing wit?

Correct: A beautiful blond with an amazing wit?

Incorrect: Father had passed on his curly blonde hair to Seema and Sheela.

Correct: Father had passed on his curly blond hair to Seema and Sheela.

When to use Blonde?

This word is more commonly used by women. Also, in the noun, the spelling is typically blonde. In American usage, the “blond” is applicable for both adjectives and nouns. Some suitable usage of blonde in sentences are as follows:

Incorrect: Perhaps it was the blond hair in my comb.

Correct: Perhaps it was the blonde hair in my comb.

Incorrect: She recognized the pet blond, who wrenched open the door and ran away.

Correct: She recognized the pet blonde, who wrenched open the door and ran away.

Examples of Blond – using Blond in a Sentence:

Some suitable usage of blond in sentences are as follows:

Examples of Blonde – using Blonde in a Sentence:

Some suitable usage of blonde in sentences are as follows: