In the English language, homophones are those words and phrases which have sound alike but having a different meaning. Many times, homophones are very confusing for beginning writers as well as language learners. A similar example is A part vs. apart where both are such homophones. Although both have similar pronunciations, different things, and meanings and also, they are actually different parts of the speech.

People, are often confused with A part and apart, especially by non-native speakers of English. Apart is mostly used as the adverb which denotes the separation between two or more things. But “A part” which is with two words and it is meant for “a fraction of a whole of something,”. Also “A part” is used in theatre for the meaning of “an actor’s role.”

Many times “Apart” with “from” is also used as a preposition. Thus, the two expressions are identical in spelling but for space. Both are having the same origin. Apart came to English from the Latin words ad, with meaning “to,” and pars, with meaning “a piece, division, or share.” On the other hand, the part is derived from “partem” which is the Latin accusative form of pars.

Thus, it is very amazing how a word that is all about separation came to be so similar to some phrase. If someone is not sure whether to use a part or apart, then don’t worry. A little bit of research and careful proofreading will never have to wonder for correct usages. This article will be helpful for part vs. apart usage in the sentences. 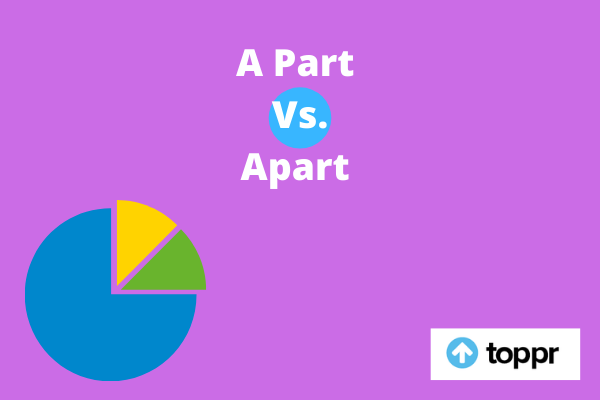 A part Vs. apart

Difference Between A part and Apart

A part is not as the adverb. It is a phrase that specifies something considered as one constituent of a larger whole. For example, a muffler is a part of a car. Another example – having a good haircut is a part of a handsome looking. In many cases, a part will be suitably paired with the preposition “of”. Also, it has been found that, in many cases, the “a” in the phrase “a part” is superfluous and hence eliminated.

For example – He was proud to be a part of the team that won the world championship.

The above sentence can be simply written as-

He was proud to be part of the team that won the world championship.

Many times the “a” is necessary. For example

Reema tried to put together her new toy set, but she lost a part and was not able to complete it.

The above sentence cannot be written as-

Reema tried to put together her new toy set, but she lost part and was not able to complete it.

“Apart” word is used as the adverb. It is considered as the synonym of separately, which is to describe something that is not with other things.

A part is the combination of two words, with “a” as an article and “part” as a noun synonymous with “piece”. A part is usually seen with the preposition of. For example,

May I have a part of your lunch?

Actually part can also refer to a piece of something as the component of it. For example,

He will like to fix his bike, but he has to buy a part for it.

Finally, a part may refer to an actor’s role in some play or movie. For example,

Have you given an audition for a part in the school play?

When to Use Apart”?

Tailor sewed the hem too short on his dress, so he is going to take it apart.

Apart from all the work Ramesh did keeping the rental house clean, that was a very enjoyable holiday for all.

Your taste in books and Sita’s are worlds apart.

Incorrect: My parents had my brother and me two years a part.

Correct: My parents had my brother and me two years apart.

Incorrect: He and his sister used to live close to one another, but now both live miles a part.

Correct: He and his sister used to live close to one another, but now both live miles apart.

Examples of A Part – Using a part in a Sentence:

Examples of Apart – Using apart in a Sentence: