Flyer and flier are the alternate spellings of the same word in English. As both are sounding identical, the words “flier” and “flyer” are homonyms. This article will help to find out the suitable usage for Flier vs. Flyer. During earlier days, flier and flyer were used interchangeably. These to mean for someone or something that flies.

However, there is a distinction between these two words that has emerged over the last century. The main difference between flier and flyer is that a “flier” is a person or thing that flies. Actually, the “flier” word was used in American English and meant for a leaflet. But, nowadays Americans are using “flyers” for a leaflet. As an example, we have, “He is a frequent flier due to his work.”

The word “Flyer” is the preferred spelling used in British English, and now in American English too. As in another example, “I saw a flyer for your purpose on Saturday”. And also in “Pin these flyers to the notice board now.” It is thus clear that Flier vs. flyer is very interesting. Let’s understand flyer vs. flier with learning! 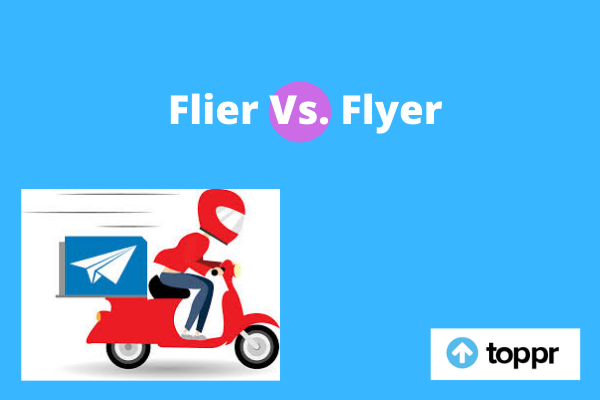 Difference Between Flier and Flyer

Outside the USA the words ‘flier’ and ‘flyer’ are being considered as the same word. Although these two words are being used interchangeably, still the spelling ‘flyer’ is much more common in comparison to ‘flier’. Both the Oxford dictionary and the Collins dictionary prefer the spelling ‘flyer’ over the ‘flier’. Merriam –Webster dictates the word ‘flyer’ should refer to be as ‘an advertising circular’.

Whereas the word ‘flier’ is being reserved for ‘one that flies’. Therefore, the difference between “flyer” and “flier” is not mainly related to British or American English variations. These are just spelled differently and mean the same. As a result, we have no restrictions regarding their usage. Thus, we can replace “flyer” with “flier” and vice versa without changing the meaning of our sentences.

Flyer: The flyer is used as a noun. It often refers to the pamphlet or handbill which is used to spread information or advertise something. For example, someone might put up a flyer to advertise their company products. Or, even one can pass out a flyer to look for his lost cat. The term can also refer to something that flies—whether that be a passenger on an airplane, a pilot, or a bird. Less commonly, it can be a tool that twists yarn.

Flier: The word flier is thus just another spelling of the same word. It carries the same signification as “flyer” and it is also accepted as a correct version in the English vocabulary. Word flier can be used in all contexts where we use “flyer”, with the same meaning. They are replaceable.

How to Use the Flyer?

Incorrect: The flier has plenty of information about the upcoming concert.

Correct: The flyer has plenty of information about the upcoming concert.

Incorrect: In a scene from another Disney film, Bolt, the number 877 was seen printed on a flier.

Correct: In a scene from another Disney film, Bolt, the number 877 was seen printed on a flyer.

How to Use the Flier?

Technically, we may use the word flier any way we might use flyer. According to the AP Style Guide, there are very few phrases in which the flier is only the correct answer. Also, taking a flier on investment, or when someone is expected to see no return or any profit on the investment.

Incorrect: He is not a nervous flyer. Still, I realize it’s still the safest form of travel.

Correct: He is not a nervous flier. Still, I realize it’s still the safest form of travel.

Incorrect: I have always been a good flyer and definitely I love the whole experience.

Correct: I have always been a good flier and definitely I love the whole experience.

Examples of Flier – Using Flier in a Sentence:

These birds are graceful fliers.

Examples of Flyer – Using Flyer in a Sentence: