Gray and grey are having the same meaning and they represent a shade/colour between black and white. The word ‘Gray’ is frequently used in American English whereas the word ‘Grey’ is used in British English. If you live or spend some time in the United States of America, the most popular and most common spelling of the gray word has a. On the other hand, if you are in Britain or any other English-speaking country, they will probably spell the word grey, with e. So if words can be used exchangeable, why are there two different spellings? To know this, we need to look at the history of Gray Vs. Grey. Both words are derived from Greig, an Old English word. As time passed the spelling of the word changed many times. Eventually, gray and grey became the two most common spellings.

In the 1900s, the whole world, except for the United States, adopted “grey” as the correct spelling. Today, the United States still prefers “gray.” There are many words spelt differently in British English compared to American English. Britain often retained the spelling of words in some languages, and American English was largely based on how the words sounded.

So the difference between the two words is actually about where you are. While these two words often mean the same thing, knowing your grammar can save you from a few frustrating conversations. In this article, we will see some more clarifications on gray vs. grey. 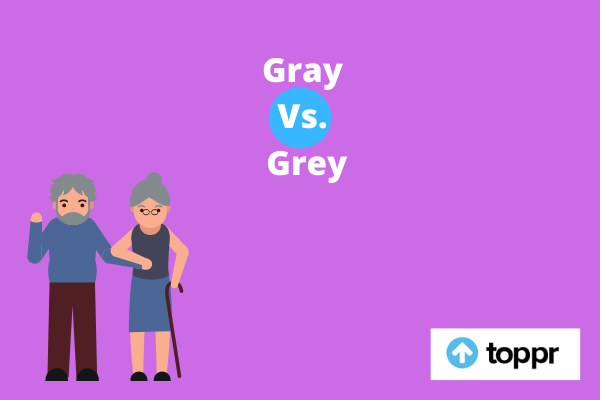 Difference Between Gray and Grey

The meaning of gray and the meaning of grey change almost every case, except for proper nouns. First, let’s talk about all the ways that gray and grey can be used. You can use them as a Noun. A noun is a word that functions to describe an object, set of objects, person, place or things. There is a colour called gray. It is a mixture of black and white and can be used to refer to paint, hair, clothing, animals, or more than any other coloured object. Here are a few examples of gray vs grey, as a noun. The man noticed the grey hair on his head. Or The man has seen the gray hair on his head. Let’s see one more example. Gray is a beautiful colour. Or Grey is a beautiful colour.

You can use them also as adjectives. Adjectives are words that modify or describe any noun. They make our writing and speaking more specific and a lot more interesting. The word gray and grey can also be used to describe nouns. You can also use it to describe dark, cloudy, gloomy or stormy weather. Finally, you can also use the term to describe someone who is elderly or sick or has a bad spirit. For example, He is in a gray mood. Or Are you are still in grey mood. Another example is gray skies or grey skies. Let’s see one more example that’s a gray skirt. Or that’s a grey skirt.

You can use the words grey and gray also as a verb. A verb is a word that shows actions, state of being. People don’t usually think about the fact that gray and grey can be used as an action, but it is possible. If you are talking about someone or something getting old or old, you can use this word to describe that process. As an alternative, you can use any form depending on where you are. For example, Mom is graying fast after Dad’s death. Or Mom is greying fast after Dad’s death.

How to use Gray?

2. Incorrect: My mother bought a grayed skirt for me.

Correct: My mother bought a gray skirt for me.

Correct: Auditors are interested in gray areas of accounts.

2. Incorrect: Today the skies are grayed but we will have better days soon.

Correct: Today the skies are gray but we will have better days soon.

How to use Grey?

Correct:  I like the grey colour of the sky.

2. Incorrect: My uncle bought me a greyed shirt.

Correct: My uncle bought me a grey shirt.

2. Incorrect: Leena’s hair is starting to greyed fast as she is alone now.

Correct: Leena’s hair is starting to grey fast as she is alone now.

Correct: CBI is more interested in grey areas of the murder mystery.

2. Incorrect: The producers love the greying areas of the movie plot.

Correct: The producers love the grey areas of the movie plot.

Examples of Gray – Using Gray in a Sentence

Examples of Grey – Using Grey in a Sentence

Hope now you find it easy to tell the difference between gray and grey.