In the first chapter of Prepositions- Introduction to prepositions, we learned briefly about the Kinds of Prepositions. In this chapter, we will dive deeper into the topic.

As we have learned, Prepositions are words that connect nouns/pronouns/phrases. It’s a bit tricky to explain the usage as it really has not many rules. But the wonders of logic will save this one. We will get into complete details of this part in our next chapter but let’s get introduced to the different kinds in this chapter:

2. Compound Prepositions: Compound prepositions are those prepositions that are made by prefixing the preposition to a noun, an adjective or an adverb. Say for example, amongst, amidst, above, around, along, across, about, below, beneath, beside, between, beyond, outside, within, without.

4. Participle Preposition: Verbs that act as a preposition. Usually, end in -ing and -ed.

Particle preposition are verbs in disguise 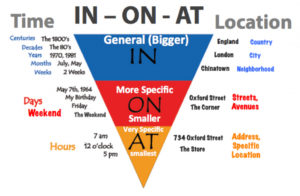 Kinds of Prepositions: According to Functionality

Note: Notice in the two tables above, the words are actually the same but the usage changes their meaning and hence the kind of preposition they make. We will understand this fully when we read about each of these functions individually further on.

3. Prepositions of Direction: These prepositions show the direction of something.

4. Prepositions of Agent: These prepositions act as an agent between a noun and usually a verb.

5. Prepositions of Instruments, devices or Machines: These prepositions connect instruments, machines or devices in the sentence.

That wraps our chapter on Kinds of Prepositions. Amazingly, all these prepositions can be used in many situations in many ways. We will break it down further and see all these kinds in the upcoming chapters. Stay tuned to Toppr Guides.

Q: Select a suitable preposition to complete the sentence:
Stella is worthy ______ a prize.

Ans: The correct option is “D”