As we know a complete sentence in grammar is made up of units. One such unit is a phrase. Let us learn about phrases, their meaning, syntax and some types of phrases that we see in English grammar like noun phrases, verb phrases, prepositional phrase etc.

The length of the phrase may differ from two words to many more words. This does not have any connection to whether it is a phrase or a sentence. For example “old dog” is a phrase. So is “the old, smelly, shivering dog” is also a phrase. 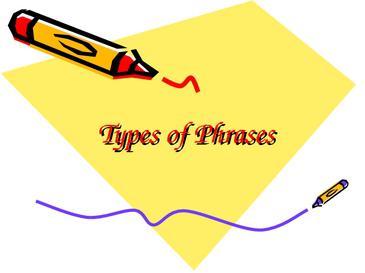 These are the phrases contains a noun- name, place or things and at least one modifier associated to the noun. The modifier can prefix or suffix the noun. The entire phrase will act as a noun for that particular sentence. Here are some examples,

Every sentence will generally contain a verb. But sometimes the action being described requires a more nuanced multi-words verb phrase. The phrase consists of the main verb/verbs and then auxiliary verbs, i.e. helping verbs. Some such verb phrases are as follows,

Now there are certain times where a prepositional phrase will act as an adjective for a sentence. It will be the answer to the question “which one?”. For example,

And then the prepositional phrase can be seen as the adverb of a sentence. How? Where? or When? are the questions that it answers.

Now a gerund is a word that invariably ends with “-ing”, without exception. So a gerund phrase is a phrase that contains an ‘ing” word, with some modifiers in some cases. But participle phrases also have a similar pattern (-ing words), so how do you tell the difference between the two?

Well while participle phrases function as adjectives, Gerund Phrases exclusively function as nouns. Let us look at some examples,

An absolute phrase will contain a noun or a pronoun with a participle. Again it may also contain additional associative words and modifiers. An absolute participle will modify a whole clause, or even a whole sentence, not only one word. However, it does not constitute a complete sentence or a clause. Generally, an absolute phrase is separated by commas. Let us take a look at a few examples,

Q: She went to the tiny red house on the hill. Identify the type of phrase.

Sol: This is a noun phrase. It consists of one noun (house) and two modifiers for the noun (tiny, red).