In this essay on computer, we are going to discuss some useful things about computers. The modern-day computer has become an important part of our daily life. Also, their usage has increased much fold during the last decade. Nowadays, they use the computer in every office whether private or government. Mankind is using computers for over many decades now. Also, they are used in many fields like agriculture, designing, machinery making, defense and many more. Above all, they have revolutionized the whole world. 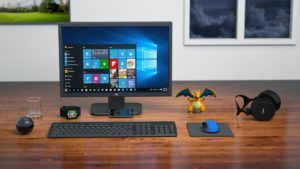 It is very difficult to find the exact origin of computers. But according to some experts computer exists at the time of world war-II. Also, at that time they were used for keeping data. But, it was for only government use and not for public use. Above all, in the beginning, the computer was a very large and heavy machine.

Working of a Computer

The computer runs on a three-step cycle namely input, process, and output. Also, the computer follows this cycle in every process it was asked to do. In simple words, the process can be explained in this way. The data which we feed into the computer is input, the work CPU do is process and the result which the computer give is output.

Components and Types of Computer

The simple computer basically consists of CPU, monitor, mouse, and keyboard. Also, there are hundreds of other computer parts that can be attached to it. These other parts include a printer, laser pen, scanner, etc.

The computer is categorized into many different types like supercomputers, mainframes, personal computers (desktop), PDAs, laptop, etc. The mobile phone is also a type of computer because it fulfills all the criteria of being a computer.

Uses of Computer in Various Fields

As the usage of computer increased it became a necessity for almost every field to use computers for their operations. Also, they have made working and sorting things easier. Below we are mentioning some of the important fields that use a computer in their daily operation.

They use computers to diagnose diseases, run tests and for finding the cure for deadly diseases. Also, they are able to find a cure for many diseases because of computers.

For any country, his defence is most important for the safety and security of its people. Also, computer in this field helps the country’s security agencies to detect a threat which can be harmful in the future. Above all the defense industry use them to keep surveillance on our enemy.

Threats from a Computer

Computers have become a necessity also, they have become a threat too. This is due to hackers who steal your private data and leak them on internet. Also, anyone can access this data. Apart from that, there are other threats like viruses, spams, bug and many other problems.

The computer is a very important machine that has become a useful part of our life. Also, the computers have twin-faces on one side it’s a boon and on the other side, it’s a bane. Its uses completely depend upon you. Apart from that, a day in the future will come when human civilization won’t be able to survive without computers as we depend on them too much. Till now it is a great discovery of mankind that has helped in saving thousands and millions of lives.

A.1 A computer is an electronic device or machine that makes our work easier. Also, they help us in many ways.

A.2  Computers are majorly used in defense, medicine, and for research purposes.