Elephants are quite large animals. They have four legs which resemble large pillars. They have two ears which are like big fans. Elephants have a special body part which is their trunk. In addition, they have a short tail. The male elephant has two teeth which are quite long and are referred to as tusks. 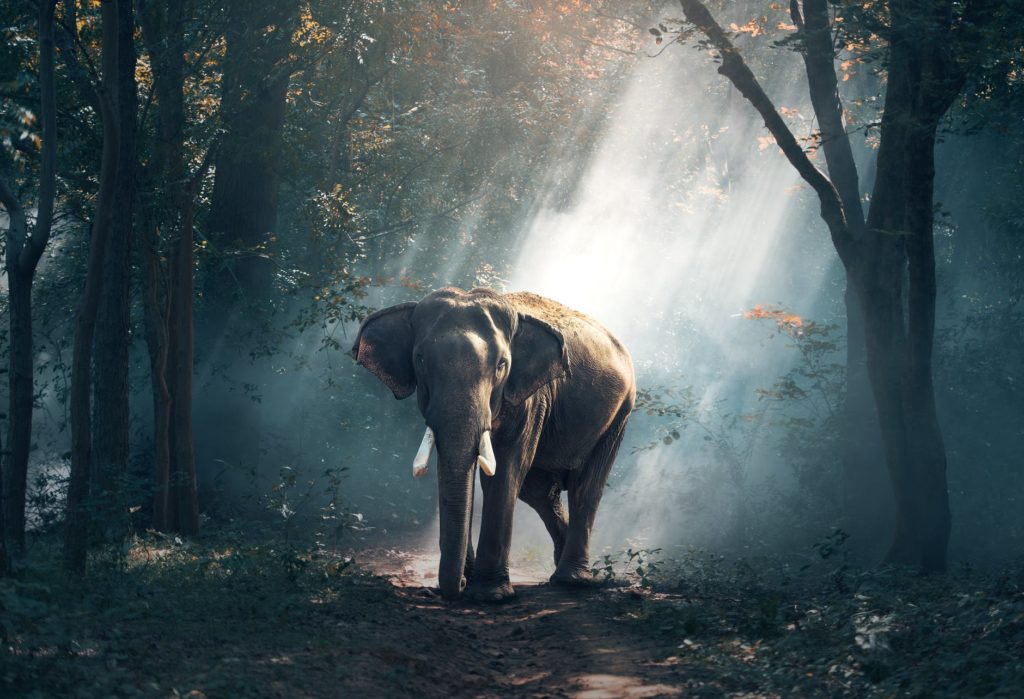 Elephants are herbivorous and feed on leaves, plants, grains, fruits and more. They are mostly found in Africa and Asia. Most of the elephants are grey in color, however, in Thailand, they have white elephants.

In addition, elephants are one of the longest-lived animals with an average lifespan of around 5-70 years. But, the oldest elephant to ever live passed away at the age of 86 years.

Furthermore, they mostly inhabit jungles but humans have forced them to work in zoos and circuses. Elephants are considered to be one of the most intelligent animals.

Similarly, they are quite obedient too. Usually, the female elephants live in groups but the male ones prefer solitary living. Additionally, this wild animal has great learning capacity. Humans use them for transport and entertainment purposes. Elephants are of great importance to the earth and mankind. Thus, we must protect them to not create an imbalance in nature’s cycle.

Elephants come in the group of most intelligent creatures. They are capable of quite strong emotions. These creatures have earned the respect of people of Africa that share the landscape with them. This gives them a great cultural significance. Elephants are tourism magnets for mankind. In addition, they also play a great role in maintaining the biodiversity of the ecosystems.

Most importantly, elephants are also significant for wildlife. They dig for water in the dry season with their tusks. It helps them survive the dry environment and droughts and also helps other animals to survive.

In addition, the elephants of the forest create gaps in the vegetation while eating. The gaps created enables the growth of new plants as well as pathways for smaller animals. This method also helps in dispersal of seeds by trees.

Furthermore, even elephant dung is beneficial. The dung they leave contains seeds of plants they have consumed. This, in turn, helps the birth of new grasses, bushes, and even trees. Thus, they also boost the health of the savannah ecosystem.

Elephants have found their way on the list of endangered species. Selfish human activities have caused this endangerment. One of the biggest reasons for their endangerment is the illegal killing of elephants. As their body parts are very profitable, humans kill them off for their skin, bones, tusks, and more.

Moreover, humans are wiping out the natural habitat of elephants i.e. the forests. This results in a lack of food, area to live, and resources to survive. Similarly, hunting and poaching just for the thrill of it also cause the death of elephants.

Therefore, we see how humans are the main reason behind their endangerment. In other words, we must educate the public about the importance of elephants. Conservation efforts must be taken aggressively to protect them. In addition, poachers must be arrested to stop killing of the endangered species.

FAQs on Essay on Elephant

Q.1 Why are Elephants important?

A.1 Elephants are important not only to humans but wildlife and vegetation too. They provide sources of water for other animals in the dry season. Their eating method helps in the growth of new plants. They maintain the balance of the savannah ecosystem.

Q.2 Why is endangerment of elephants harmful?

A.2 Human activities have caused endangerment of elephants. Extinction of these animals will create an imbalance in the ecosystem gravely. We must take steps to stop this endangerment so they can be protected from extinction.