Ruskin Bond is a famous author, who is an Indian despite his British descent. Furthermore, Ruskin Bond is highly influential in the development of literature among children in India. It will certainly be worth discovering the life of this eminent personality with this essay on Ruskin Bond. 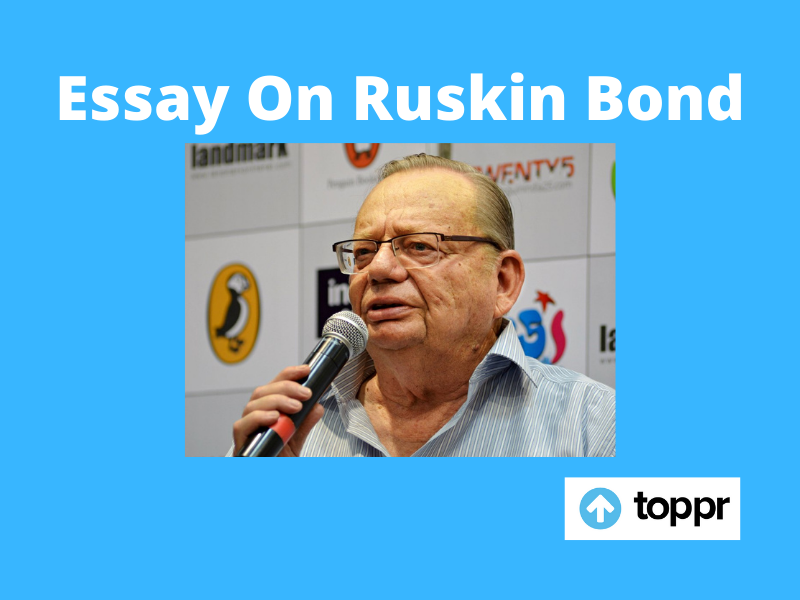 Ruskin Bond was born in Kasauli, India, on May 19, 1934. Furthermore, the names of his parents are Edith Clarke and Aubrey Bond. His father served in the Royal Air Force and therefore he moved, along with his son, from one place to another on a regular basis.

At the age of eight, the separation of Ruskin Bond’s parents took place. Afterwards, his mother married a Punjabi-Hindu man. Moreover, the relationship of Bond with his mother was complex as there was very little affection between the two.

His father’s attention towards him was undivided and this helped him grow. However, there was a sudden departure of his father from his life. Such tragedy certainly had a deep impact on Ruskin Bond and left him broken.

Following the sudden demise of his father, Ruskin Bond went to live with his grandmother in Dehradun. Furthermore, his early education took place at Bishop Cotton School in Shimla.

During his school years, several writing competitions took place which Ruskin Bond won. Among his various prizes are the prestigious Hailey Literature Prize and the Irwin Divinity Prize. In 1952, he completed his graduation.

The first twenty years of his life impacted him in such a way that it made him a good writer. In spite of a difficult childhood, there was development and enhancement in his personality.  Most noteworthy, Ruskin took the decision of becoming an earnest writer, which was in accordance with his father’s desire.

Therefore, he was able to find solace in reading books. Moreover, the reason for the inculcation of this reading habit in Ruskin Bond was his father. Some of his favourite reads consist of Rudyard Kipling, Charles Dickens, Charlotte Brontë and Rudyard Kipling.

Ruskin Bond has a simplistic yet interesting reading style that can quickly attract readers. Moreover, his style is easy enough, such that the children and laymen can understand his works. The biggest influence on his writing works is perhaps due to his stay in the beautiful hill stations at the Himalayan foothills.

Ruskin Bond wrote the famous work ‘The Room on the Roof’ merely at the age of 17, which was influenced by his experiences at Dehra Dun. From that point onward, Rukin Bond has come up with a massive three hundred novels, short stories, and essays. Moreover, some of his popular works are ‘The Blue Umbrella’, ‘Vagrants in the Valley’, and ‘A Flight of Pigeons’.

Conclusion of the Essay on Ruskin Bond

Ruskin Bond is a man who people will always remember as a major figure in English literature. The man has helped in increasing the literature knowledge of Indian children. His efforts are recognized all over the world among the elites of the English language.

FAQs For Essay on Ruskin Bond

Answer 1: Ruskin Bond is an eminent Indian writer of British descent who is famous for authorizing very prolific literature books for children. Furthermore, due to his immense effort in the field of English, he was awarded the prestigious Sahitya Akademi Award.

Question 2: What is the writing style of Ruskin Bond?

Answer 2: Ruskin Bond’s writing style is conversational, simple, and easy to read. Furthermore, there was a significant influence on his writing style by his stay at the Himalayan foothills hill-stations.