In an organization, a manager is not expected to do all the work. He has numerous functions of management on which he has to focus. So the routine day-to-day work is delegated to his subordinates. And along with the delegation of work, there is also the delegation of authority so that the subordinate can accomplish his tasks. 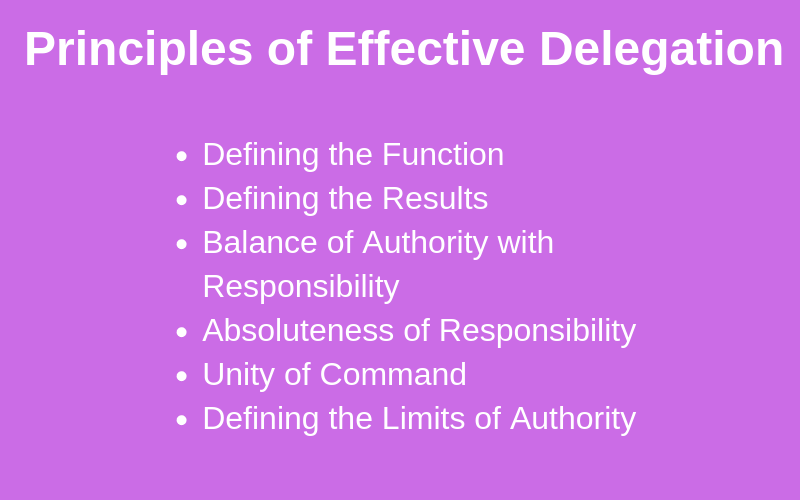 Before actually delegating the authority, the manager should clearly define the scope and the extent of the tasks to the subordinate.

The subordinate should be aware of the tasks he has to perform, the activities he must oversee, their relationship with the other jobs and their importance. This will help him perform the task better.

Learn more about Difficulties faced in Delegation here in detail.

Before delegating the authority, the manager should discuss with his subordinates the results he expects from this task.

This will allow the subordinates to understand the standard of work and the level of results expected from them. And then accordingly the authority must be delegated.

3] Balance of Authority with Responsibility

The should be parity between the responsibility and the authority delegated to the subordinate for effective delegation.

In an organization, there must always be a unity of command. So at any given time, there must be only one superior for every subordinate.

If one subordinate receives instructions and orders from more than one superior it will lead to confusion and conflict. He may have to pick who to listen to and it may lead to divided loyalties.

6] Defining the Limits of Authority

Another point to note is that the manager must ensure that all the subordinates have well-defined authority. So we can avoid any overlapping of authority which enables the subordinate to carry out his work efficiently.

And if there is work outside this scope of authority, the subordinate must refer this work to his superiors.

Also. managers at each level of the organization should make use of their authority. They must avoid referring to their superiors for matters that come under their authority. Only matters outside of their scope must be referred to as upper-level management.

Managers at each and every level should try to make his own decision and avoid referring to his superior’s decision all the time and try to make their decision which they are authorized to. Only if the decisions are out of their scope they should refer to their superiors.

Q: What is the importance of effective management?

Ans: Effective management is important as it,