Table of content
1 Suggested Videos
2 Indian Currency
2.1 Some Trivia
2.2 Browse more Topics under Rbi
3 More on the RBI and Currency Management
3.1 All that you need to know about the new denominations
3.2 Some Questions
4 Practice Questions

There are some really interesting trivia about our currency that you all should know. The name rupee has been derived from the Sanskrit word, rupaya, which means a silver coin. The silver coin called rupiya was first issued in the 16th century by Sultan Sher Shah Suri. The Mughals too continued this. Even in the British India period, the rupiya was in use. After our independence, over some period of time, the Indian rupee replaced all other forms of currencies that existed in India.

Prior to 2010, the Indian rupee had a different symbol. But post-2010, a new symbol, ‘₹’, was adopted officially. Did you know that this symbol has been derived from the Devanagari consonant “र” and the capital letter R?

More on the RBI and Currency Management

The RBI in India has some really important functions. Among these functions, we can find that the RBI is also responsible for the maintenance and regulation of currency notes. It is the sole body that can authorize the issue of currency in our country. One of its functions also includes the prevention of counterfeiting of currency, with the help of enhanced security features. The RBI can authorize to issue notes up to the value of ten thousand rupees and coins up to the value of one thousand.

The RBI advises the government, which in turn decides on the various denominations of the notes that have to be issued. The RBI also has a role in the designing of the currency notes, giving it some enhanced security features. It ensures that there is enough currency in the system, including both notes and coins. In case of old notes, the RBI screens through these notes and the ones that are fit for circulation are sent back into the system, while the mutilated ones are destroyed.

All that you need to know about the new denominations

After the demonetization, the RBI has come up with new currency notes. Here are the salient features of these denominations. Take a look. 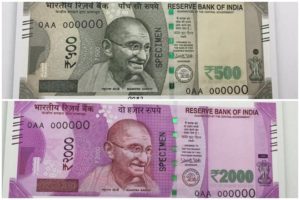 1. The printing of paper currency occurs at how many facilities and where are they located?

Ans. The printing of paper currency in India occurs at four facilities that are located in the following places – Dewas, Nasik, Mysore, and Salboni.

2. Demonetization of which denominations have occurred recently and what is the actual date?

3. What are the salient features of the new 10 rupee denomination?

Ans. The salient features are

4. What are the languages in which the amount of the currency is written in?