Maurya Period from 322 BCE to 187 BCE. Iron Age was the start of this great empire and covered the almost whole Indian subcontinent geographically. Maurya empire was the great empire to flourish in India.

The founder of this great dynasty is Chandragupta Maurya along with the help of his Guru Chanakya. Chanakya was the renowned guru at Takshashila hence wrote the famous Arthshastra. Insulted the Nanda dynasty king Dhana Nanda, he swore to destroy the dynasty. hence rained and guided Chandragupta Maurya to accomplish his revenge.

Chandragupta’s successor was king Bindusara and his Grandson was King Ashoka. Due to there great kings, Maurya dynasty ruled over India for many reasons. Therefore flourishing the Indian states with art, culture, traditions, and knowledge including army welfare and political knowledge.

Pre Mauryan Period witnessed a lot of political changes and therefore making changes in economies. The last dynasty to rule Magadha was Nanda dynasty. Nanda dynasty was brought into power by Mahapadma Nanda and hence led by his son king Dhana Nanda. He was the last ruler of Nanda dynasty. Although the Nanda dynasty brought wealth to the dynasty but was unable to rule. 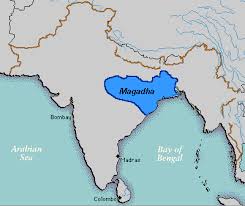 King Ashoka ruled for 50 years and after the war of Kalinga, he led the path of peace and Buddhism. Since the successor of king Ashoka wasn’t capable of ruling the kingdom. Maurya dynasty begins to decline. Political disputes between the empire and also geographically empire deserted.

Q1. Which of the following does not testify to the import of Aryan Culture on the Sangam age?

Answer: The correct answer is ”c”. Works like the Tolkappiyam and the Kalaviyal say that the Aryans introduced the rituals and ceremonies of marriage (Karanam). The Aryans having introduced Sanskrit to the world also influenced the Sanskritic ideas into the Sangam literature. Likewise, there was anxiety to connect to local dynasties with the events of Mahabharata.

Q2. Starting with the oldest, identify the correct chronological order of kingdom in the evolutionary phases of Magadha empire.

Q3. The highly polished monolithic Ashokan Pillars were carved out of single pieces of a buff-coloured sandstone, usually mined from the quarries of _________.

Answer: The correct answer is ”a”. The pillars of Ashoka are a series of columns dispersed throughout the Indian subcontinent, erected or at least inscribed with edicts by the Mauryan king Ashoka during his reign in the 3rd century BC. Of the pillars erected by him, twenty still survive including those with inscriptions of his edicts. They were quarried at Chunar, just south of Varanasi and taken to their sites before or after carving.