Table of content
1 Suggested Videos
2 Drainage
3 Drainage System of India
4 The Himalayan Rivers
4.1 The Indus Valley System
4.2 The Ganga River System
4.3 The Brahmaputra River System
5 The Peninsular Rivers
5.1 The Tapi Basin
5.2 The Narmada Basin
5.3 The Godavari Basin
5.4 The Mahanadi Basin
5.5 The Krishna Basin
5.6 The Kaveri Basin
6 Lakes
7 Role of Rivers in Economy
7.1 River Pollution
8 Here’s a Solved Question for You

The term drainage describes the river system of an area. Do you know that all the rivers of an area meet at one point and drain into a larger water body such as a lake or a sea or an ocean? Yes. a drainage system is an area that is drained by a single river.  A mountain or upland separate two drainage basins. Such a separation is known as water divide.

The drainage system of India, that is, the rivers, is divided into two major groups: 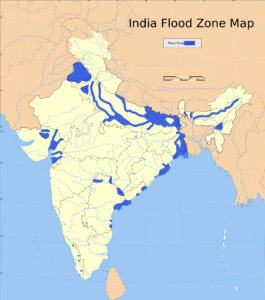 Lets study about the drainage system of India in detail.

The river Tibet starts in Tibet, near lake Mansarowar. It flows west and enters India in the Ladakh district of Jammu and Kashmir. the tributaries that join Indus in this region are the Zaskar, the Nubra, the Shyok and the Hunza. Then the river flows through Baltistan and Gilgit and emerges from the mountains at Attock. In Pakistan, the Satluj, the Beas, the Ravi, the Chenab and the Jhelum join the Indus near Mithankot.

Beyond this, the river flows southwards and reaches the Arabian Sea, which is east of Karachi. The Indus plain has a gentle slope. Indus is one of the world’s longest rivers with a total length of 2900 km. Most of the Indus basin is located in Jammu and Kashmir, Himachal Pradesh and Punjab. the rest of the river is located in Pakistan.

‘Bhagirathi’ which is the headwaters of the Ganga is fed by the Gangotri Glacier. It is joined by the Alaknanda at Devaprayag in Uttarakhand. The Ganga emerges at Haridwar from the mountains on to the plane. Many major rivers join the Ganga which includes the Yamuna, the Ghaghara, the Gandak and the Kosi. the river Yamuna emerges from the Yamunotri Glacier in the Himalayas. It meets the Ganga at Allahabad at the right bank.

The Ghaghara, the Gandak and the Kosi rise in the Nepal Himalaya. The tributaries which come from the peninsular uplands include the Chambal, the Betwa and the Son. These rivers do not carry much water in them.The Ganga flows eastwards till Farakka in West Bengal. This is the northernmost point of the Ganga delta. From here, the river bifurcates. The length of the Ganga is over 2500 km.

The Brahmaputra rises in Tibet east of Mansarovar lake very close to the sources of the Indus and Satluj. It is slightly longer than the Indus. Its course mostly lies outside India. The Brahmaputra then flows eastwards parallel to the Himalayas. It enters India in Arunachal Pradesh through a gorge. It is joined by the Dibang, the Lohit, and many other tributaries in Assam. Unlike other northern rivers, Brahmaputra forms huge deposits of silt on its bed causing the river bed to rise.

The Western Ghats, which runs from north to south close to the western coast, forms the main water divide in Peninsular India. The major rivers of the Peninsula which flow into the Bay of Bengal include the Mahanadi, the Godavari, the Krishna and the Kaveri. The Narmada and the Tapi are the only long rivers which flow west and make estuaries.

The Tapi rises in the Satpura ranges, in the Betul district of Madhya Pradesh. Its basin covers parts of Madhya Pradesh, Gujarat and Maharashtra. The main west rivers flowing west are Sabarmati, Mahi, Bharathpuzha and Periyar.

The Narmada river rises in the Amarkaantak hills in Madhya Pradesh. It flows towards the west in a rift valley. On its way to the sea, it forms many picturesque locations like the ‘Marble rocks’ and the ‘Dhuadhar falls’.The tributaries of the Narmada are very short. This basin covers parts of Madhya Pradesh and Gujarat.

The Godavari is the largest Peninsular river. It rises from the slopes of the Western Ghats in the Nasik district of Maharashtra. The length of the river Godavari is about 1500 km. It drains into the Bay of Bengal. It also has the largest drainage basin. The basin covers parts of Maharashtra, Madhya Pradesh, Odisha and Andhra Pradesh. The tributaries that join the Godavari are the Purna, the Wardha, the Pranhita, the Manjra, the Wainganga and the Penganga.

The Mahanadi rises in the highlands of Chhattisgarh. It reaches the Bay of Bengal after flowing through Odisha. The length of the Mahanadi river is 860 km. It covers parts of Maharashtra, Chhatisgarh, Jharkhand and Odisha.

The Krishna river rises from a spring near Mahabaleshwar and flows for 1400 km. It reaches the Bay of Bengal. The tributaries of Krishna river are the Tungabhadra, the Koyana, the Ghatprabha, the Musi and the Bhima. Its drainage system covers parts of Maharashtra, Karnataka and Andhra Pradesh.

The Kaveri rises in the Brahmagri range of the Western Ghats and reaches the Bay of Bengal in the south of Cuddalore, in Tamil Nadu. The total length of the Kaveri river is 760 km. The main tributaries of Kaveri river are Amravati, Bhavani, Hemavati and Kabini. It covers parts of Karnataka, Kerala and Tamil Nadu. 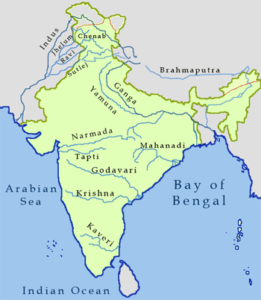 India has many lakes. One of the most lakes is the Dal lake of Kashmir which attracts thousands of tourists. Most lakes are perennial and some contain water only during the rainy season. Most of the freshwater lakes are in the Himalayan region. The Wular lake in Jammu and Kashmir is the largest freshwater lake in India.

Other freshwater lakes include the Dal lake, Bhimtal, Nainital, Loktak and Barapani. There are also some artificial lakes such as Guru Gobind Sagar, which are formed by the damming of water.

Role of Rivers in Economy

Rivers are of great importance to humans. We use them for irrigation, navigation, hydropower generation, etc. A country like India, where agriculture is an important occupation, rivers are of significant importance. Thus, the drainage system of India is a basic natural resource of water.

Q: In which of the following states is the Wular lake located?