The absolute necessity of Water in our lives and on our planet needs no explanation as such. However, we need to understand the structure and the properties of water to understand its chemical behaviour and its importance. Let us take a look at these.

Water has some very important uses in our world. It is the universal liquid and will find a use in 99% of life’s functions. This unique ability of water to be so versatile and ubiquitous is due to some of its very impressive properties. These properties of water are often overlooked, but are the main reason for what makes water such a valuable compound, 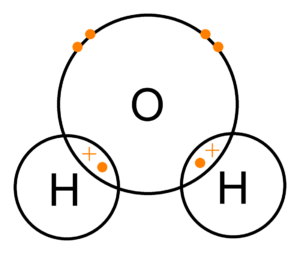 Oxygen is a more electronegative element in comparison to water. This results in an uneven distribution of electron density. This gives the water molecule an angular bent structure. The H-O-H bond has a slight angle of about 104.5°. So it can be said that water molecule is polar. It has a slight negative polarity near the oxygen atom and slight positive charge near both the hydrogen atoms. 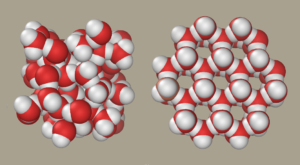 The structure of the molecules of water in its frozen form i.e. ice is very unique. It forms a Lattice Structure that does not generally occur naturally in any other substance other than ice.

When water reaches its freezing point its atoms rearrange themselves in a very specific three-dimensional pattern. The oxygen atom is surrounded by four hydrogen atoms. Two of these form O-H bonds normally seen in water molecules. The other two form a hydrogen bond.

This very special hexagonal shape is what gives ice the unique property of being less dense than water. Since in the structure of ice there are empty spaces between the hexagonal structure, its density is less than that of water in its liquid state. This is why ice floats on water.

Q: Which of the following are properties of water?
I. It has a permanent dipole moment attributed to its molecular structure.
II. It is a very good conductor of electricity.
III. It has its polar covalent bonds with hydrogen on opposite sides of the oxygen atom so that the molecule is linear.

Ans: The correct answer is “A”. The property I only can be assigned to water.