Did you know that about 60% of your body is water!? And in some organisms, it’s as high as 90%! We are not kidding. Fresh drinking water is getting depleted day-by-day. Proper management of these resources is the need of the hour. Let’s learn more about the importance and uses of water in this section.

Most of the evolution theories state that life started with water. When we look at other planets far away from earth but not so far away from life, we are always looking for water as a sign of a beginning of life. Our own planet Earth’s 71% of the area is covered with water! Water really is the biggest source of life.

But does this mean that – what can start a planet, the lack of it can also finish it? Scary, right? But how can there be an end of the world by harming our water sources? Is there a need to save water?

You must have seen some very serious slogans or campaigns to stop global warming and save water. Let’s learn all about it in this chapter and see what one single person like you can do to change the situation. After all, small actions result in big impacts. You are the future and you can absolutely be the change you want to see.

Fun fact: Nearly 97% of the world’s water is salty or otherwise undrinkable.

For such an important element like water, you’d think that the chemistry behind it must be quite intense and complex. But you’d be surprised that it is not at all complex! It is composed of one oxygen atom and two hydrogen atoms- H20. Also called a universal solvent, water has the ability to dissolve almost everything in it. Do you know what a Water cycle/hydrological cycle is? It is the continuous movement of water from land to air to water and the cycle continues. I will explain to you in very simple steps- 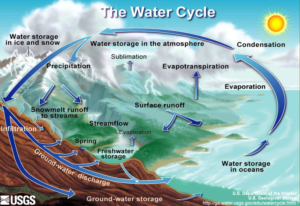 One of the most basic needs of a human is food! Food is grown in various parts of the world according to the climatic conditions but one thing that all kinds of crops need without an exception is water. We all know how water, sunlight and nutrition from the soil are key to a plant’s growth. Every year farmers sow seeds and wait for rains to replenish their farms so as to get their crops ready for the harvest season.

Whether it’s your favourite curry or your favourite dessert, everything requires some amount of water in the preparation. Water not only boils and therefore kills all the germs in your food making it healthy, it also is an important part of the dish to make it yummy.

Water that is used for drinking is called potable water. Our body uses water in all its cells, organs, and tissues to help regulate its temperature and maintain other bodily functions. Because our body loses water through breathing, sweating, and digestion, it’s important to rehydrate by drinking fluids and eating foods that contain water.

Provides Home to Millions of Creatures

Not only is water the soup from which life emerged, the mighty ocean and other water bodies are actually home to more life than on land! Mammals, fish, birds, insects, trees, plants, algae, krill, and many other forms of life either live directly in water or are wholly dependent upon it for survival.

There are even worms that live in the icebergs formed from nothing but water! And you would be surprised at how every organism is super important to live in the eco-system. Something as far as a worm can affect the life of a whale in the food chain. Can you believe these marvels caused by water? Without water, life would lose its primary food source.

To travel on a vehicle, you need a road to travel on. For travelling on a train, we need a train track. But what happens when you want to travel longer distances in a short time and to places where you cannot build train tracks or roads like over water for instance.

For that, you use an aircraft. But aircrafts have limited space and the fuel costs way too much. What if we wanted to transport large goods and over oceans. For that, you need ships and ships can only travel on water! Ship transport is primarily used for the carriage of people and non-perishable goods, generally referred to as cargo.

Now that we saw how water really is the soup of life and has uncountable uses of water to humankind and earth, let’s delve into how to best manage this water and save it for a better future in the next section!

Q:  Which of the following is not a source of potable water?