You should read history because by reading history only you can able to know about the study of past events because it is important for any society and human being. Do you know about the New Empires and Kingdoms in the ancient times? Many New empires emerged after the demises of Mauryas. A  powerful New Empire named as Gupta dynasty has emerged in 3rd century AD. Let’s find out more about New Empires and Kingdoms.

The period for Gupta age is in between 320-540 AD. In this time actually in India rapid development took place in different fields like in the field of art, architecture literature, philosophy, trade, science, and agriculture. Therefore, this age is called the golden age of Indian history. 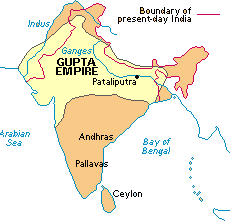 Samudragupta distributed the information on gold and silver coins. The accounts of the writers like Fa-Xion also mentioned about coins and literary sources. Some other sources are also there such as the works of Kalidas, Raghuvansa, Meghadoot, and Abhijnana Shakuntalam.

Sri Gupta is the founder of Gupta dynasty. However, Chandragupta was the first powerful ruler. In 320 AD he ascended the throne. He had the matrimonial alliance with Lichchhavi princess. So, in the history of Gupta Empire, this was the main turning point.

Samudragupta is the son of Chandragupta. Next, he became the commanding ruler. The Allahabad pillar has his glory and conquest described. This includes his court poet and Harisena.

Next, after him, Chandragupta Vikramaditya came who is the reason behind the spread out and strengthen of Gupta Empire. In his rule, he visited India and occupied Saka territories. This way, the expansion of rule over the Indian subcontinent continued.

The king basically ruled the central government. A group of ministers helped the king in decision making. The lower level administration had a district or group of villages. Gramadhyksha headed each of the villages. The Mahasenapatis played an important role. They lead the contingents of Calvary and elephants. They advised the kings about several matters.

Famous astronomers and mathematicians like Aryabhatta and Varahmihira wrote their work. Vishnu temple at Tigwa, Shiva temple at Bhumara, and Parvati temples were built at that time. The Buddhist cave in Ajanta and Bagh caves at Gwalior were of that period which is excellent for Indian art. Under the time of Guptas, Buddhism and Hinduism flourished well. At that time, the Sanskrit language reached its excellence.

Q1 Do you think ordinary people could read & understand prashaastis? If no, then give the reasons.

Sol. The prashaastis were written in the Sanskrit language so the ordinary people would not have understood this.

Q2. What is the name of three authors who wrote about Harshavardhan?

Son. Banabhatta, Xuan Zang, and Ravikirti are the three authors who wrote about Harshavardhan.

Share with friends
Previous
Civilising the Native, Educating the Nation
Next
New Empires and Kingdoms