A square is one of the most basic and often recurring shapes in geometry. We all know that it is a shape where all four sides are equal. But do you know the important square formula? Actually there is not just one square formula, but several important ones in mensuration. Let’s take a look.

Introduction to a Square

We all are familiar with the figure, square. It is a quadrilateral wherein all the four sides and angles of it are equal. All the four angles are 90 degrees each, that is, right angles. You can also consider square as a special case of a rectangle where you will find that the two adjacent sides are of equal length.In this article, we will mainly be focusing on the various square formulas such as its area, perimeter, length of the diagonals and examples.

The perimeter of a Square =4a

Where ‘a’ is the length of a side of the square.

Properties of a Square

Derivation of Area of a Square 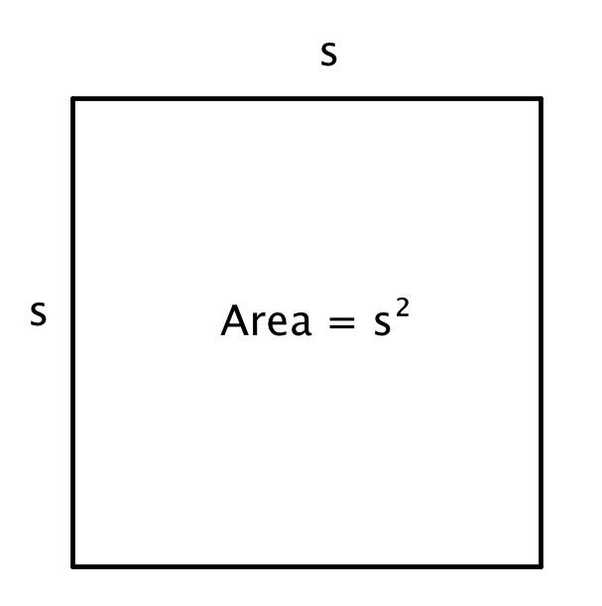 To better our understanding of the concept, let us take a look at the derivation of the area of a square. Let us consider a square where the lengths of its side are ‘a’ units and diagonal is ‘d’ units respectively. As you all know that area of a square is the region which is enclosed within its boundary. As we have already mentioned, that a square is a special case of a rectangle that has its two adjacent sides being of equal length. Therefore, the area can be expressed as –

Area of a rectangle = Length × Breadth

Derivation of the Perimeter of a Square

The perimeter of the square is the total length of its boundary. The boundary of a square is represented by the sum of the length of all sides. Hence, the perimeter is expressed as –

Derivation of the Lenght of a Diagonal of a Square

As you all know that the diagonal is a line that joins the two opposite sides in a polygon. Therefore, in order to calculate the diagonal length of a square, we use the Pythagoras Theorem. If you mark a diagonal in the square, then you will realize that the diagonal divides the square into two right-angled triangles. Now, the two adjacent sides of a square are equal in length. And the right-angled triangle works as an isosceles triangle with each of its sides being of length ‘a’ units.

Thus, we can apply the Pythagoras theorem on these triangles which have base and perpendicular of ‘a’ units and hypotenuse of ‘b’ units. So, according to the formula we have:

Now, that we have some understanding about the concept and meaning of square formula, let us try some examples to deepen our understanding of the topic

Example 1 – The side of a square is 5 meters. What is the area of the square in m2

Solution 1 – As we know that the sides of а square are of equal size. And the formula for the square’s area is a × a where a is the side of the square. Hence,

Example 2 – The perimeter of a square is 24 cm. What is the area of the square is cm2