Have you noticed that all the slices of the pizza are equally cut? Every slice is an equal part of the whole pizza. Cutting out a piece of cake or a pie also forms some sectors of the circle. Similarly, you can depict some useful information in the form of a sector of a circle. This can be done by making Pie Charts. The Pie Chart is a collection of slices showing the numerical proportion. Let’s see how to make a chart and a linear graph in this section.

A pie chart is a circular representation of data. In it, data is represented by sector of a circle. The sectors of the circle are like the slices of a pie or pizza. The only difference is that in a pie chart the sectors are of different sizes. The size of each sector is related to its frequency. Let’s see how to make a chart.

How to Make a Chart?

The pie chart below shows the proportion of the number of employees on the basis of their qualification. Just like a line graph, a linear graph is formed when a set of coordinates are joined by a set of a line segment. The only difference is that these line segments are so joined that they form an unbroken line. In other words, we will have a straight line when all the set of points join. Let us get familiar with the term co-ordinates.

Suppose you are blindfolded and one of your friends is giving you directions to move. If he says move 5 steps to the right and then 5 steps in front. What will you do? You first go right or move front first? If you are saying right then you are a good listener. But if you are going to move in front you are wrong. 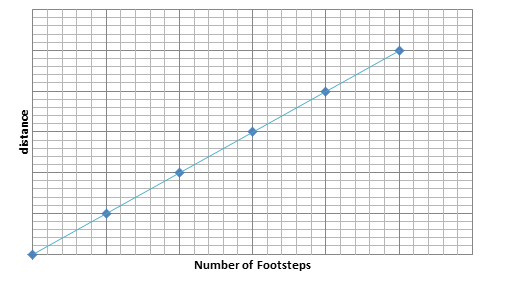 It is interesting to know that we can sometimes predict some future value based on the pattern of the linear graph.

Solution: The graph for the above points. This concludes our discussion on how to make a chart and a linear graph.

Question 3: What is the meaning of the pie chart in mathematics?

Answer: A Pie Chart, also known as a pie graph is a chart that uses the ‘pie slices’ to represent the relative sizes of data. This chart is divided into various segments, where each sector displays the relative size of every single value.

Question 4: Does a linear graph have to be straight?

Question 5: Is a pie chart a graph?

Answer: Yes, a pie chart is a spherical graph that represents the relative contribution that is contributed by various categories to an overall total. A wedge of the sphere symbolizes the contribution of each category.

Share with friends
Previous
Bar Graphs
Next
Introduction to Graphs