Suppose you and your friends are playing with two dice. You note down the various possible outcomes of the sample space. When one of your friends throws the dice, he did not tell the result. Instead, he said that when you add the two numbers you will get an even number. Can you now guess the result of his throw? It is interesting to know how this additional information affects the probabilities of the possible outcomes. This is the basic concept of multiplication theorem on probability. Let us get more familiar with it.

Taking the above example of throwing of two dice, the possible outcomes are

There are 36 elements in the sample space S. The probability of occurrence of any of the possible outcome is P(Ei) = 1/36. We don’t know the result of the throw of the dice by the friend. However, we have the information that the sum of the numbers is even. Let us find how this information is affecting the probability of the outcome.

The probability for each of these outcomes is P(A |Ei) =  18⁄36 = ½. This example shows that some additional information may change the probability of the happening of some event.

For two events A and B, 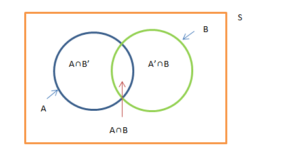 Proof: From the concept of conditional probability, we have

The multiplication theorem on probability for dependent events can be extended for the independent events. From the theorem, we have, P(A ∩ B) = P(A) P(B | A). If the events A and B are independent, then, P(B | A) = P(B). The above theorem reduces to

This shows that the probability that both of these occur simultaneously is the product of their respective probabilities.

Extension of Multiplication Theorem of Probability to n Events

Extension of Multiplication Theorem of Probability to n Independent Events

For n independent events, the multiplication theorem reduces to

Question 1: A box contains 5 black, 7 red and 6 green balls. Three balls are drawn from this box one after the other without replacement. What is the probability that the three balls are

The balls are drawn without replacement. For the first draw, there are 18 balls to choose from. The number of balls gets lessened by 1 for the second draw i.e., 18 − 1 = 17 and 16 for the third draw.

It does not matter which color ball is drawn first.

Question 2: What is the multiplication theorem for probability?

Answer: The theorem says that ‘the probability of the concurrent occurrence of 2 events that are self-determining is provided by the product of their separate probabilities.

Question 3: What is the law for multiplication?

Question 4: What are the rules for probability?

Answer: We have 3 basic rules that associate with the probability, these are: Addition, Multiplication, and the Complement rules. We express them as: ‘P(A or B) = P(A) + P(B) – P(A B)’.

Question 5: What are the 3 axioms of the probability?

Answer: The 3 axioms of the probability are as follows: