The probability of any event is defined as the chance of occurrence of the events to the total possible outcomes. If there are ‘n’ exhaustive, mutually exclusive and equally likely outcomes of a random experiment. Out of which, ‘m’ are favorable to the occurrence of an event E.

The probability definition is given as the ratio of the number of favorable events to the total number of exhaustive ones. This probability is equal to m⁄n.

Events and Its Algebra

Any subset of a sample space is an event. In other words, a combination of outcomes of a random experiment is an event. It is denoted by capital letters.

Based on random experiments, events are of following types.

The events which are impossible to happen come in the category of impossible events. The empty set Φ is an impossible set. Consider an example of a pack of 52 playing cards, the event of getting a card of number 12 is impossible.

The set of all possible outcomes which are certain to occur form sure event. The entire sample space is a sure event. For example, in a random experiment of tossing of a coin the event of getting a tail is a sure event.

Learn the Probability of an Event here.

Any event is Simple if it corresponds to a single possible outcome of the experiment. In other words, if any event has only one sample point of a sample space it is a simple event. In a random experiment of throwing of a die, the sample space

Any event is Compound if it corresponds to more than a single possible outcome of the experiment. In other words, if any event has more than one sample point of a sample space it is a compound event. In a random experiment of throwing of a die, the sample space

Based on the Set theory, we can perform some algebra on events. Some of them are the union or the intersection of events. Let us study them in details.

Event A or B

Event A and B

Let A and B be two events. The event A and B show the sample points of a random experiment which are common to both A and B. It is similar to the intersection of two sets A and B. Event A and B = A ∩ B.

Event A but not B 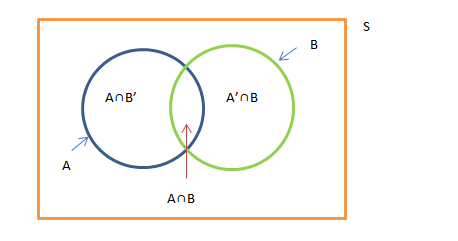 Below are some of the used statements and their meaning in terms of set theory.

Based on the above algebra of events, we can define some other events.

An event in which all the outcome has an equal chance to occur. In throwing a die, all six faces are equally likely to come.

Two events are independent if there is no effect on the happening and the non-happening of one by the others. In throwing a die, the result of getting 2 in a first throw does not affect the result of second and other throws.

The Probability Definition of an Event

Below is the list of probability definition associated with an event.

Question 1: Problem: Suppose there are 4 red, 6 blue and 2 green balls in a bag. Two balls are drawn at random from the bag. Find the probability of that the two balls drawn are red.

Question 3: What is meant by probability?

Question 4: Explain the significance of probability?

Answer: The product rule of probability states that the probability of two or more independent events whose occurrence takes place together can be calculated by doing the multiplication of the individual probabilities of the events.

Question 6: How many types of probability are in existence?